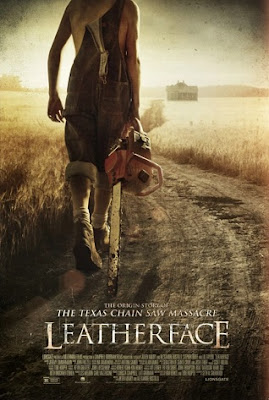 All of the major horror franchises have had their ups and downs in quality. None of them are quite as intensely diverse or poorly constructed as a franchise as the Texas Chainsaw Massacre series though (although Amityville gives it a run for its money.) Starting off with one of the iconic films that continually influences the genre to this day, the rest of the series is a hodge podge of slashers that shift in style almost as much as they shift in quality. After the train wreck (but weirdly effective box office earner) that was Texas Chainsaw 3D, the series was in desperate need of an artistic overhaul. When they announced that French filmmakers Julien Maury and Alexandre Bustillo were going to take a stab at a prequel for the franchise, eventually titled Leatherface and not to be confused with Leatherface: The Texas Chainsaw Massacre III, it was easy to get excited. While Leatherface is most definitely a unique spin on the usual Texas Chainsaw lore, it’s also a film that forces its hand a bit too often in trying to appeal to the fanbase and shock its audience. It’s a film with key moments of heightened effectiveness, but succumbs to the series’ lack of cohesion too.

With their own series of modern classic horror films in their filmography like Inside and Livid, this French duo were a very inspired choice for the film. Inside was one of the pioneering films of the shortly lived French extreme horror boom of the 00s and their ability to balance tight tension with malicious bursts of violence and gore was impeccable. It was a balance that would be perfect to drag the Texas Chainsaw Massacre series out of the hammy slasher hell. If there is anything that truly shines in the film, it’s their visual prowess in developing tension and gutting it with intense violence. The use of lighting and iconic tones from the original film give it a classic look while maintaining a hard edge modernity which is demonstrated through the intense special effects and gore that it splatters its audience with. This is not a film for the faint of heart and it will do its best to shock, gag, and scar you with some of its imagery and intensity of its violence. If anything, this is what Maury and Bustillo do best as directors and their direction of the horrors in the film are in full display.

Leatherface does suffer from being incohesive though. The film starts on a rather awkward note, catering to the usual Texas Chainsaw Massacre crowd with its opening sequence that smacks of fan service and feels tacked on as if it’s a reminder of what film series the audience is watching. Just in case you forget as it shifts gears from there and spins the origin story of its titular horror figure in a rather new and fresh manner. In this film, Jed has been placed in a mental care facility for children who grow up in socially unhealthy homes. It’s during an impromptu escape, which leaves most of the facility workers dead in the goriest ways, that a small group of violent young people take a poor nurse hostage and hit the road on the run from the cops, lead by a very intense Stephen Dorff looking to take revenge for the death of his daughter at the hands of the Sawyer family. Most of the second act is dedicated to being a kind of vicious road trip flick as our crew attempt to not kill one another as they hash out their plans. The trick of all of this is that the audience is not actually sure which one is Jed, our eventual chainsaw wielding maniac, since the kids all had their names changed when they were pulled out of their families. This presents a fun game for fans of the series as they attempt to decipher just who is going to end up being Jed and tease out the various clues. It’s not like it’s a huge surprise when its revealed in the third act, as the film reverts to a more classic Texas Chainsaw scenario with our nurse on the run from the family, but the idea is there and it’s an entertaining spin on the character.

It’s just too bad that the narrative is uneven in the end. It leaps from classic Texas Chainsaw moments to feeling like a completely different film and the directors seem very intent on jamming as much shocking and dark material in the film as possible to take it to some new extreme heights. In this endeavor, the film ends up missing out on truly establishing the more likable protagonists for the sake of racking up the tension and violence. Is it interesting that the police are just as violent and unflinching as the villains? Yes, but it doesn’t leave much room for us to care if our leads survive the eventual crossfire of viciousness if they aren’t built to feel real. This also leaves many transitional scenes, requiring a character motivation or choice to spur on the narrative momentum, feeling awkward and forced without a lot of reason or sense to it.


Between the uneven script and lacking cohesive narrative, Leatherface is a film that’s all shock and style and not a lot of substantial foundation to lift it up where it might have gone. The film looks impressive with key lighting, effects, and frame work being some of the best that the series has seen thus far and it has plenty of intense shocks and horrific moments to appease the gore hounds of the series, but it remains a middle of the road film thanks to its weaker writing. In concept, it’s wildly respectable for taking the Texas Chainsaw series on some new roads (joke intended) yet it’s also one that is afraid to go too far off the beaten path to be the artistic tour de force it should have been. Fans will enjoy it for its classic moments and some will appreciate what it attempts, but Leatherface is hardly the cornerstone film to relaunch the franchise that it wanted to be.