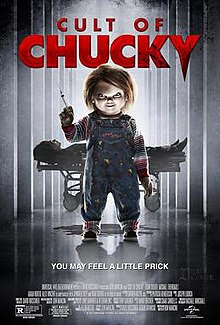 By the time that the fifth entry, Seed of Chucky, in the decades long Child’s Play franchise had arrived, the series felt wildly off track. This iconic horror franchise has always had its ups and downs, but the first ‘reinvention’ with Bride quickly fell stale and became a parody of itself without enough core horror elements to carry it. This left the stripped back and roots embracing sixth entry, Curse of Chucky, to become a breath of fresh air that displayed just why this series was so much fun to begin with. Now this little jaunt back in time for a couple of entries in the series may seem redundant for fans or those familiar with the Child’s Play franchise, but it’s important to remember now that the seventh one, Cult of Chucky, has been unleashed. That’s because this latest entry into the killer doll series is the perfect amount of traditional slasher and outlandish self-aware camp that we’ve all come to expect from Don Mancini and company. It’s delightfully aware of its own boundaries, maintains the pieces we all watch a Chucky movie to see, and still has no issue with breaking some new ground and pushing the series into some fresh feeling territory. It’s a film that covers a lot of territory and seemingly does it with relative ease to being one of the best of the franchise.

Not that continuity has ever been a strong piece of the Child’s Play series, but at this point it’s nice to know that the films continually understands its knotted narrative issues and plays with them. Cult of Chucky, for all of its loose interpretations of canon details for its own plot, deals out nods to the series with such an energetic wink-wink attitude it’s hard not to just enjoy it as it goes. This is the center of why Cult works. It’s a film that changes what it needs to, homages what it thinks fans will enjoy, and still manages to power forward with the tone and concept that has made the Child’s Play films some of the most daring and off beat ones in the horror genre.

Cult of Chucky picks up after the events of Curse of Chucky, following Fiona Dourif’s Nica Pierce as she is blamed for the deaths of her family and is institutionalized. Of course, it’s not long before our villainous doll Chucky, once again voiced with pizzazz by her real life father Brad Dourif, shows up to finish the job he started long, long ago. It’s somewhat of a basic slasher premise. It has an isolated location with memorable broad stroke characters, a sense of disbelief to the all of the events, and plenty of gimmicky situations to deliver kills and thrills. The film even sticks intently to the slasher formula in its structure. There are a handful of great twists into the plot, particularly in the final act (and the final handful of minutes) that the film didn’t reveal in its trailers which come off as big crowd pleasers for fans, but generally speaking, Cult sticks to its core slasher guns with gusto.

That’s only the foundations of the film and it’s how Mancini and his team approach the style and tone that makes is so wickedly entertaining and blissfully outlandish. Perhaps for the first time in the franchise, Cult adds in an atmospheric and surrealistic tone to its proceedings that gives the film a unique feel when compared to its predecessors. The almost black and white tones of the sets and lighting make Chucky’s colorful appearance seem even more invasive and abrasive to the calm of the setting and there is a hazy feel to the narrative that is paralleled by moments of hypnotism and psychological horror. The film is self-referential with some of its characters and cheesy lines of black humor, as indicated by the return of Jennifer Tilly, but it works so much better here with the surrealistic spin. Bringing back Andy, played by the original actor nonetheless as he further embraces what was a fan service cameo at the end of Curse, only adds to the layers of throwback meets the future of the franchise and the manner that Mancini balances it all is perhaps some of the most impressive direction in the series since Ronny Yu brought his dense style to Bride of Chucky.

Not to give too much more away in Cult of Chucky, but it’s a film that finds the perfect balance between the series’ meta-concepts and the more serious throwback slasher elements that made Curse of Chucky such a delight. All of the pieces of the film match this balance too. The gimmicky, but effective performances, the stylish, but still gruesome kill sequences, and the slasher structured, but twisted spin on the script all make this entry one of the best of series and one of the best of the year. Fans are going to love how it connects to the rest, but it adds just enough new twists and spins to make sure that it could very well be the first chapter in a brand new era for the franchise.

What more could one ask for from the seventh film of Child’s Play? It’s a brilliant play on a classic and it deserves the praise and recommendations it has received.