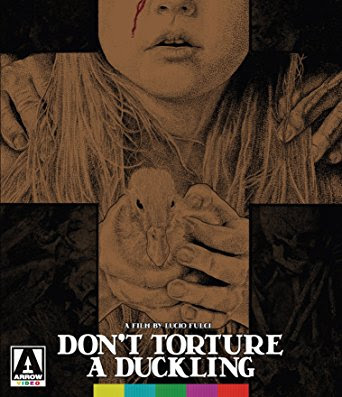 Lucio Fulci will always be known as a godfather of gore with magnus opus films like Zombi 2 and The Beyond underneath his belt. Yet, the director was a much more diverse artist than just splattering the screen with death and violence and spent a large portion of his career dedicated to other styles and approaches. Of these other films, one of his most well regarded is his 1972 spin on the giallo genre, Don’t Torture a Duckling. Granted, giallo films are still firmly situated in the horror genre so it’s not a huge leap from his more wildly known material for readers of this site, but it’s one of those prime examples of how Fulci could handle horror with vicious elements without being necessarily in your face with it. Not only that, but Fulci accomplishes the task rather well by giving the film palpable tension and using the mystery murder plot to invoke some primal emotions through its thematic punch. It’s not one of his most upfront and thrilling films as Don’t Torture a Duckling does have some issues ultimately, but for fans of giallo films or those looking to dig into the genre, it’s one that deserves a look – particularly in the new jam-packed Arrow Video release.

By 1972, the giallo genre was essentially in full force in the Italian industry and Fulci had already thrown his hat into the ring with a previous film, A Lizard in a Woman’s Skin. Don’t Torture a Duckling is a film that attempts something different from the usual formula of the genre with its approach to writing and focuses. Its more dramatic and crime thriller centered slant sets it aside just enough to feel unique. The film still has those intense moments of horror elements that seep through the atmosphere that do push it into some abrasive horror territory, but keep in mind that this is not like the usual later Fulci material. This is a film of more complex narrative appeal and Fulci pretty much nails it.

This approach to a more dramatic and crime thriller allows it to dabble more with its mystery elements and create an atmosphere of unease and tension. The manner that the story plays out can be a bit unusual though even when its hitting the usual giallo tropes. Mainly, the film lacks a defined and central protagonist. It’s a film that’s driven by an ensemble cast of various types, all of which may or may not be the killer on hand, and while this adds a sense of chaos and unsteady ground for the audience to grapple with, it’s also problematic as none of the characters truly get the amount of back story or development to be a true connection to the audience. Each has their strong traits, thanks to some fantastic screen presences and performances from the cast, but some desperately deserve to be fleshed out more fully.

This seems even more relevant when some of the secondary characters are revealed to be involved, in larger capacities, as the film spins its narrative through the reveals of the criminal case. Fulci handles the leaping focuses admirably well. The intertwining characters and plot developments make for an effective build of tension as Don’t Torture a Duckling throws twists at the audience and Fulci loves to break the tension with shocking moments. The film already has an abrasive concept, seeing as the victims are all children, but the film never shies away from showing brief shocking moments to break the tension. In particular, there is a sequence where the local townsfolk take justice into their own hands against one of their own and the results are astonishingly grim and vicious showcasing the director’s use of violence that he would later embrace fully.

Given that the film is about a child serial killer, features a very heavy-handed criticism of the problematic elements of small town life, and does not shy away from the darker portions of the script, Don’t Torture a Duckling is not a film for everyone. It has a rather daring approach to the structure with its ensemble cast that digs into some of the more intriguing aspects of the giallo formula and Fulci shows off his ability to balance the tension and the performances of its dense script, so even if it comes off as problematic at times it’s a rousing success. It’s a film that truly, well beyond the usual mainstream understanding of his work, flies with Fulci’s abilities as an artist. It’s a bold film and deserves as much respect even if it is abrasive. It’s for these reasons that Don’t Torture a Duckling deserves this fantastic Arrow Video release that’s packed with fan friendly material and iconic packaging. The list of the new features is posted below, but all of that is just icing on the giallo cake here and if there is one reason to pick up this Blu Ray release it’s the film itself. Highly recommended. 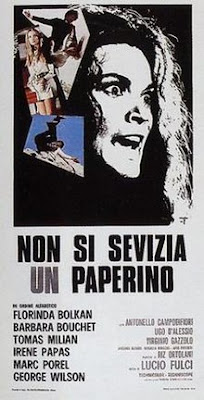