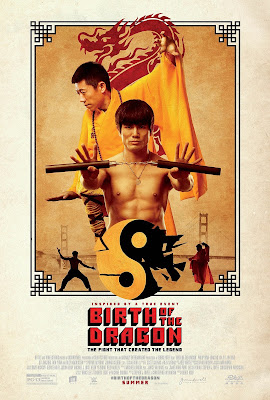 When the word started spreading around online that the latest Bruce Lee focused film, one surrounding the events of his fight with Wong Jack Man and entitled Birth of the Dragon, it was not good. Fans were upset that the film seemed to treat the entire thing like an excuse to exploit Bruce’s fame and fortune and worst yet, neither Bruce Lee nor Wong Jack Man were the protagonists. It was actually a young white guy that was driving the story forward. Fast forward to a month prior to its release in theaters and producers stated that the film shown at festivals was just an early cut of the film and that this one, which was getting a wide release thanks to WWE and Blumhouse, would take fans’ concerns into account for a better movie. If that was the case, then I have no need to see the first cut of the film because Birth of the Dragon suffers from the exact same problems that fans were concerned with originally. The entire concept is flawed and no amount of Phillip Ng charisma, Xia Yu deadpan seriousness, or Corey Yuen fight work can save the film from simply being awkward. There are certainly moments when one can see some appeal to Birth of the Dragon, but it’s hard to get around the glaring flaws of the film on its foundational levels.

Bruce Lee (Phillip Ng) is finding some success with his Wing Chun school in California. He’s getting serious interest from Hollywood for a role on the Green Hornet and his larger than life charm and ego make it hard to ignore him. Yet, his student Steve (Magnussen) is still intrigued by the arrival of Shaolin monk Wong Jack Man (Xia Yu) and goes to meet him, ultimately setting the two masters on a path where they will meet one another in a legendary fight. Oh, and there is some triad stuff and a romantic subplot for Steve.

Birth of the Dragon is like two movies jammed together awkwardly. On one hand, there is the dramatic interpretation of the Bruce Lee and Wong Jack Man fight and the colliding forces of “old school kung fu” and the “future of kung fu.” On the other hand, there is an entire second movie where a young and troubled young man falls in love with girl bought by triads and attempts to save her. Somewhere, somehow, some person thought it was a good idea to smash them together. The results are a film that’s flawed from the outset and a narrative that seems unsure of how to get them to work together while being entertaining and still trying to water down the philosophical concepts of kung fu for a generally western audience. To call it awkward is an understatement.

The problem inherently is that Lee’s student Steve acts as the main protagonist for the film by driving the action forward with his loosely developed love story (which lacks a lot of emotional resonance) and as the audience connection for both Lee and Wong Jack Man to spew their various kung fu philosophies onto. Why is that a problem? Well, it is weird that a white gentleman would be the reason two legends would collide, particularly since the film does its best to avoid using the reason of ‘teaching kung fu to non-Asians’ as the reason Wong Jack Man comes to the US as it was rumored in real life, but it’s also because his character is so bland that he has nothing to do but exist as a plot device for the film. Seriously, he is a non character used for a couple of solid joke lines in the last act and a plot progression. That’s it and it’s horribly disappointing.

That being said, it’s not like all of Birth of the Dragon is terrible. Both Phillip Ng and Xia Yu bring their A-game to the screen as the two fighters. Ng already channeled the Bruce Lee spirit in the film Once Upon a Time in Shanghai, but he really gets to strut his Lee caricature impression here and Xia Yu does a solid as the Shaolin monk being confronted with a world he is not familiar with. The legendary fight coordinator and director Corey Yuen works on the film and it’s obvious as the Hong Kong style of fight work is present in how its paced, shot, and choreographed which was something of a surprise. Director Nolfi, who does an overall decent job visually, does do some unusual things with the actual Bruce Lee and Wong Jack Man fight to give it a kind of mystical and legendary look, but overall the action was fun and often well done (even if some fans have issues with the editing and wire work – which was a non-issue for me.)

Yet, despite a few goods and more than too many bads, there is one sequence in Birth of the Dragon’s third act that stood out as the moment where the film missed out in expanding into something truly special. At this point, our bland as water protagonist Steve goes to save his girlfriend from the triads and Bruce Lee and Wong Jack Man must team up and fight through a restaurant full of thugs to save him. It’s at this point where Phillip Ng and Xia Yu showcase impeccable onscreen chemistry with full classic kung fu action and just enough wit and banter between the two to make it massively entertaining. It was here that I realized the film missed out on turning this entire event into a fantastic new age of Bruceploitation. Not that the sub-genre hasn’t been alive and well in trying to capitalize on Lee’s legacy, but the idea of a Bruce Lee/Wong Jack Man vs triads film appeals so much more than anything else in the film and when it happens it’s almost brilliant. Perhaps that’s just me and my love for Bruceploitation that makes this sequence so appealing, but here’s to hoping that it's a sign of more things to come in the genre.

As is, Birth of the Dragon is a film that ultimately disappointments. It’s awkward in jamming in its protagonist, faulty in adding in too many subplots, and never finds a narrative flow that works. The core concept of Bruce Lee and Wong Jack Man is appealing, particularly thanks to two strong performances from those two as almost caricature style representations of real people, but the film only utilizes that to its maximum benefit in a few sequences. Martial arts fans will find the watered down style of the film disappointing, it’s a bit too hammy for more serious cinephiles, and it takes its concept too seriously for an entertaining kung fu flick but too silly for being ‘inspired by true events.’ For each moments that works, there are two that don’t.  Birth of the Dragon isn’t as inspired as it thinks it is and that’s the ultimate sin. Give me great or give me entertaining. Just don’t give me awkward.