New Battles Without Honor and Humanity: Last Days of the Boss (1976) 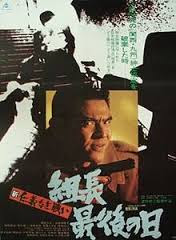 With Last Days of the Boss, Kinji Fukasaku seals off the second series of Battles Without Honor and Humanity films on a very entertaining sprint. Like its director predecessor, The Boss’s Head, this entry is less about recreating the density and complexity of the original series and it tries to be more in tune with the action packed exploitative efforts of 70s Japanese action films instead. This leaves New Battles Without Honor and Humanity: Last Days of the Boss as a rip-roaring ride of morally gray characters, blissfully chaotic action set pieces, and a wake of bodies that starts stacking up immediately. It’s perhaps the furthest that the series has moved away from its roots as dramatic gangster realism, but it’s hard not to still see the gleaming entertainment and depth of character work that Fukasaku brings to the table with all of his films from this era. Perhaps one of the weaker films when it comes to tight writing and expertly crafted tension, but it’s also a film that replaces those things with a wild and chaotic ambition that doesn’t betray the tone of the series either.

It’s meant to be a time of peace between the yakuza groups of western Japan. Yet, it’s the death of one sex worker that ignites a series of escalating events that will bring the two groups into a war fought by their own more extremist members. For Nozaki (Bunta Sugawara) and his sister (Chieko Matsubara) this means that they will be caught in a hurricane of bullets, blood, and bastard assassins. As it continues barreling down a violent path, Nozaki will have to go to extremes to right the wrongs against him and his family.

Immediately, it’s evident that Last Days of the Boss wants to establish a frantic pace and chaotic tone for the film. After the opening credits with the classic Battles theme track playing, the film leaps into the events that set off the two yakuza clans into a warring state. Last Days of the Boss uses a lot less voice over narration in the film, although its used to establish the context in the opening, and this is intentional as the film focuses on keeping its audience in the break neck pacing and not pulling them out for the explanations. Within the first 15 minutes of the film, there are already a handful of intense action sequences with a half-dozen characters killed to pile up the body count. The film never lets up either. The main characters that will end up driving the momentum of the film are introduced on the fly and the usual ‘sitting and talking’ sequences that made up larger portions of this series are done swiftly, focusing on keeping that momentum and less about crafting the dense tension that was a hallmark of the series. In this sense, it’s easy to see why fans may not enjoy this one as much. The brisk movement of the narrative and chaotic approach to character building is much different in tone. However, the change of pace is beneficial to the evolution of the series’ themes and comes as a welcome shift.

Of course, this alteration in focus and narrative style is handled expertly by Kinji Fukasaku. The script can be a bit more hit or miss, generally speaking, as the sister of the lead character seems more like a secondary role when it could have been crafted into some much more impressive and impactful or how some of the secondary roles fly by in the narrative sprint, but Fukasaku handles it impressively well. It helps when he has a phenomenal cast (like he always does) that’s anchored around Sugawara who is given one of the most dynamic roles he has seen in the series yet that increasingly gets more cold, violent, and hardened as the film progresses. The shaky-cam style of the action fits impressively well with the more chaotic tone of the script and narrative and the more robust action sequences only add to that feeling. There are the usual street battles and intense bursts of gun fighting, but there is also a spectacular vehicle chase with dump trucks that adds a new level of intense action to the mix that sets this one apart.

This Arrow Video release, along with the first two parts of the New Battles trilogy, is a must see for fans. Considering how rare these films were before this release, the money is well spent for fans of the original series or those looking to expand their yakuza/Fukasaku collections. The interviews on all three discs with the writer are impressively insightful though and for this entry it was great to hear about the beginnings of this script as it was meant to originally be about a brother and sister caught in a massive coal mining accident. Add to the that the impressive amount of articles on all three films included with the booklet where there are some interesting looks at the context of the films and fans are sure to get what they want.

If anything, New Battles Without Honor and Humanity: Last Days of the Boss lacks a bit of the emotional impact of the stronger entries of the original series, but as an entertaining yakuza action drama it hits all its marks. It’s a cinematic experience that moves so quickly, if you blink you’re apt to miss something. It’s this fast pace and impressively chaotic action sequences that prove to be the highlights of the film even if it could have used some moments to breath some extra life into the smaller (but still important) characters of the narrative. As a Battles film, Last Days of the Boss might be a slightly inferior emotional journey, but it works as an evolution of the franchise themes to be a massively entertain romp into the 70s world of Fukasaku’s yakuza material. It comes highly recommended. 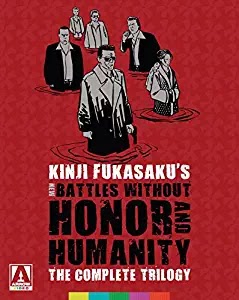 Written by Matt Reifschneider
Posted by DarkReif at 10:54 PM