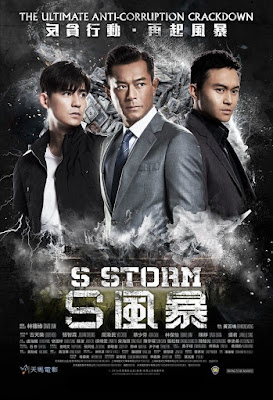 Sometimes, being a dedicated film consumer means being a glutton for punishment. In this case, that meant watching S Storm. There is no official reason for me to watch S Storm nor is there any kind of benefit to reviewing it really, but I felt like I had to because I saw and reviewed the first film, Z Storm, for the site. The second of this newly minted franchise, S Storm might actually be inferior to its lackluster predecessor in a lot of ways. This is quite the statement. Z Storm, also starring Louis Koo, was about as underwhelming as it was flawed in its execution as a crime thriller and this sequel seems dedicated to dethroning it as one of the most irrationally crafted films I’ve seen lately. Despite some interesting ideas surrounding illegal betting and the corruption task force investigating it, S Storm is confusing, hollow, and more often than not utterly illogical in how it goes about telling its story. By the time the credits suddenly rolled out of left field at the end, I was almost impressed at how the film undercut itself at every turn and, if there is anything to be said, in that regard I should applaud it.

Luk (Louis Koo), while investigating an anonymous email about corrupt members of a local soccer league, finds myself witness to an assassination. His corruption investigation is suddenly thrown to a frustrated detective and his team as a homicide case. The two will have to force their teams to cooperate if they will get to the bottom of this now layered criminal case.

Louis Koo once again returns to shed himself of any dignity as the head of an ICAC crack team in S Storm and, I suppose learning a lesson from the first film, phones it in for this one too. Normally, his presence can lift a mediocre film or anchor a great film (as I look over at my copy of Drug War on the shelf), but you’ve never seen an actor phoning it in like this since the last Bruce Willis film came out. I mention this because Koo is still, shockingly so, the highlight of S Storm. He’s got a screen presence that really tries to lift something out of the inept execution of the film, but it’s obvious that he cares a lot less than most of his supporting cast who scramble to deliver something that just isn't there. It’s hard to even blame him either. This film gives him nothing to work with and when it does have glimpses of a much stronger thriller with some kind of human emotion underneath it, like in a scene where he is the only person to pick up a drunk detective or a cryptic meeting with the soccer club’s head of security, the dialogue and direction seem half thoughtful or forced exposition.  This film does itself no favors in trying to help him, or any of the cast for that matter, and it’s just painful to watch as it plays out.

Yet, there might have been something in S Storm worth seeing if it was in the right hands. The idea of a well funded anti-corruption unit working with a scrappy police force to uncover a much deeper conspiracy is interesting. Not to mention there’s a fun idea about throwing in a commentary about the problems of modern gambling in Hong Kong society to boot. Of course, the film never gets to explore these things because it’s too busy giving random characters awkwardly placed (and often irrelevant) flashbacks or developing a love story for the assassin – a strange choice to make him the most human character to only brush him off like dust in the third act. It comes off as an unfocused and muddled narrative that wants to push in five or six directions at once and never ends up going anywhere with any of them. No matter how interesting the idea of the film might have been.

S Storm features the same writer (Wong Ho-Wa) and same director (David Lam) as Z Storm and truly it’s like the duo are on the same page in trying to parallel the sense of confusion and haphazard narratives as one another. The film looks and feels like a TV movie in its tone and hollow characterizations while it continually tries to throw twists at the audience that don’t make sense and don’t have the proper build of plot or tension to sell them. In conception, it’s not a bad idea for a film, but don’t expect more than huge disappointment if you jump into S Storm. I’m pretty sure the ‘S’ stands for a nice four-letter expletive in this case.