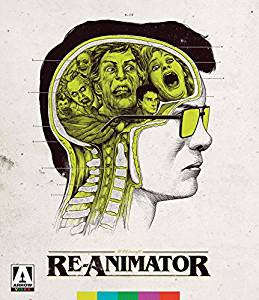 It was only last year that Arrow Video dropped on fans the fantastic new version of Bride of Re-Animator and it started a lot of online conversations about when the US would finally see some kind of new deluxe package for the original Re-Animator. Well leave it to Arrow to follow through on the unspoken promise and dropping a massive limited edition box set of the cult classic to match their previous release. Re-Animator is a film that uses its perfectly blended quirky tones of horror and comedy in the perfectly prescribed dosage and it’s quite deserving of a release like this. So not only does this film remain the iconic black comedic horror classic that has situated itself as a universal film to love for cult audiences, but this massive release matches the spunky and off beat style in an artistic manner, playing up images and content to spin fans into a fever pitch. This is the kind of collector’s release that not only showcases the a fantastic film in a grand manner, but it matches that kind of love with the features and packaging. Truly, the only thing better would have been if it came with a note attached to it that said, “Cat dead, details later.”

Dan (Abbott) is a gem medical student. He has top notch grades, he’s handsome, and he’s in a serious relationship with the Dean’s daughter. That is, until Herbert West (Combs) shows up. Now he’s involved in some weird stuff. West believes he can reanimate the dead, but his experiments need some help. Of course, when a rival medical researcher and teacher at the school (Gale) gets wind of this, everything will decidedly spin out of control.

For a review of this nature, it’s necessary to at least mention the quality of Re-Animator as a film. Now, it’s my personal opinion that this is a film any self-respecting horror fan should see at least, but it’s not always the case that classic cult films continue to find a young audience to continue their popularity as time goes on. For Re-Animator though, it seems that the popularity of the film has only seen itself grow more intense as the years have gone by and that’s a massive tribute to the quality and timelessness of Stuart Gordon’s quirky H.P Lovecraft adaption. Re-Animator is most certainly rooted in 80s conceptual horror tropes, including the blend of over the top gore and the often off-beat nature of its humorous tones, but it’s a film so well-crafted within the genre that it remains a highlight of what the style has to offer. It’s remarkably funny in some very dark ways as we see our young lead protagonist Dan start to get in over his head via his relationship with Herbert West (played with hilarious deadpan exuberance by  Jeffrey Combs,) but it’s the almost cynical and satirical nature of the needless competitive nature of the medical research field (something that still persists in relevance to this day) and the thoughtful adaption of H.P. Lovecraft’s writing into a more modernized style that works impressively at the core of the film. The intent of the film is heartfelt with its character interactions and the execution of its outlandish ideas is effective even if it can be a smidge unsettling for more casual horror fans. As things start to spiral out of control through the various and very often humorous mistakes made by the characters in the narrative, the film only gets better and it uses its energetic direction, snappy pacing, and witty dialogue to deliver the laughs and gags (both comedic and physical reflex).

Now the initial reason that this latest limited edition release from Arrow Video should intrigue fans is that it contains the Integral “cut” of the film. Essentially, what this means is that there is a version of the film that combines both the rated ‘R’ cut of the film, which features some different subplots including more sequences containing the villain’s ability to hypnotize people, and the more violent and gory moments from the unrated version of the film. Truthfully, there are plenty of places that go much deeper into the analysis of the difference of this version than the other two (for the record, this package only contains the unrated cut and not the ‘R’ rated version, although the unrated version is a pristine looking new 4K restoration of the film), but it’s the only way in the US to officially see this Integral version of the film. On a quality standpoint, the unrated cut is superior as the quicker pacing makes the film much snappier than the longer cut which is bogged down by some of its extended sequences that attempt to explain some of the minor plot holes. Yet, it’s particularly special to be able to finally see this version and fans are going to want to experience it.

The rest of the package certainly does Re-Animator justice. The box set packaging is impressive, the additional cards are a fun bonus for fans, and the full comic book version of the film is an interesting spin for those who know the film by heart. Truly though, the features on the discs are the highlight of what this limited edition offers. A feature length documentary anchors most of it, but a new commentary with director Stuart Gordon was perhaps the best part of this Arrow Video release for myself. All of it is an insightful commentary and appreciation for a film fully deserving of this kind of treatment. One cannot go wrong with this box set.

Now this is one of the few reviews where I spent the majority of the time speaking about the various features of the release instead of the quality of the film itself and there is a reason for that. Namely, it’s because Re-Animator is a superbly fun and well executed horror comedy experience that should already be on any fan’s list of preferred watching, but it’s also because this release easily ranks up there with Arrow’s Bride of Re-Animator and Society sets to continue their shrine to producer/director Brian Yuzna. The restoration is top notch, the features are informative and entertaining, and the package is a collector’s dream.

Oh yeah. And the film is a riot. If you haven’t seen Re-Animator, see it. If you don’t own it, this Arrow Video release is the only way to go. 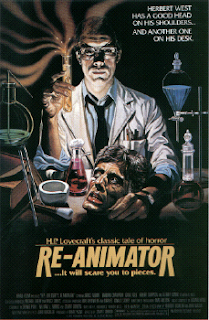