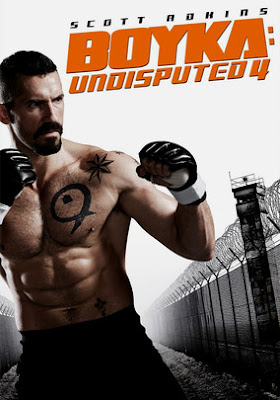 “Bring me your fucking champion.”

Perhaps this is just preaching to the choir, but by this point it’s pretty obvious that low budget, straight to home video action films are their own kind of art. Scoff if you want, but it’s true. Like most any other niche genre, it now has its own fanbase, its own rules, and its own set of expectations to be judged by. When it comes to this artform, it’s also pretty obvious that the Undisputed franchise are some the best there are, turning a fairly decent, but ultimately forgettable prison boxing flick into a strangely effective and rather brilliant straight to home video franchise. By introducing the world to Scott Adkins’ “most complete fighter in the world” Boyka as the villain in Undisputed II, this series suddenly had one of the most interesting action film characters in the last couple decades. Following his exploits has only proven to give the series more momentum in both quality and style, leading up to the best film of the franchise thus far, Boyka: Undisputed 4 (or just Boyka: Undisputed if you go by the main title card.) This fourth entry into the series showcases perhaps the best writing yet and continues to feature the high flying and impressive fight sequences this series has come to embrace. It’s a film that truly shows off the art form the genre has become and fans are going to eat it up.

Boyka (Scott Adkins) has been fighting in the Ukraine since he escaped from prison and building a name for himself on a global scale. His next venture is to head to Budapest and compete internationally. When he accidentally kills another fighter though, his guilt and religious beliefs force him back into Russia to find the man’s widow and ask for forgiveness. There he finds her buried in debt to a local mobster and strikes a deal to free her: three fights and beating the champion.

To get this out of the way initially, as it seems to be the weakest point of the film, it’s true that Boyka does not break a lot of new ground. It’s our flawed hero looking for redemption and he gets involved with some bad dudes in a bad situation and must eventually fight his way out, using his talents to maximum effect. The key to this approach though is that Boyka doesn’t need some kind of awe inspiring twist. It doesn’t need to be complicated. This film, and ultimately the series, has run itself on essentially two things: heartfelt characters and well executed basics. Boyka delivers on these fronts. It certainly seems predictable at times, but the film is so much fun to watch in the present that an audience doesn’t need to try and guess what’s going to happen next. It entertains and it uses its tropes for the reason they became tropes to begin with: they work to hook an audience for the ride. Occasionally, the film does pleasantly surprise by not making things more complicated and focuses on digging into the journey of our hero, Boyka. He goes to Russia to find a widowed woman from another fighter he accidentally killed to help her out and, remarkably, the film doesn’t have any romantic subplot between the two. By the third movie that features Boyka as a character, it’s been established that he doesn’t need a plot line like that. His own redemption has always been the focus and the film uses that as the crux to its entire narrative. It’s almost refreshing in how simple the film plays things when it comes to plot and narrative and it benefits the whole film massively in the end.

It also helps that in the writing, outside of perhaps the more cliché villains of the film and the gimmicky final fight that features a walking mountain of flesh and veins known as The Nightmare (who doesn’t need a character because he isn’t one as much as he represents all of the fighters Boyka has ever fought stacked on top of each other,) is even more grounded than before. It follows the structure of the series as Boyka proceeds through a series of fights with a time crunch, but it’s two main characters carry a lot of heart. Boyka’s continued journey to redemption for his soul is paralleled wonderfully by a woman, played with a nice subtlety by Teodora Duhovnikova to balance out of the more intense Boyka, and their connection in investing in their futures and the futures of those around them works to give the film even more heart than previous entries. Again, it’s simple, but it works.

Of course, even with a strong sense of grounding in the writing, it’s not like most people watch a film like Undisputed 4 for its narrative depth or style of storytelling. They watch it for the impressive action that these films always have on display and Boyka does not disappoint. It might be the case that Scott Adkins imbeds the lead character with a nice sense of depth and this might be his most impressive performance of the role dramatically, but he’s also engrossing to watch in an action sequence. Between his impressive screen presence and the continued brilliant fight choreography from Tim Man (who also shows up as one of the fighters Boyka must battle in the rematch from Ninja: Shadow of a Tear that I wanted) this film slathers it on heavy. It’s not quite as gimmicky as before, but new director to the franchise Todor Chapkanov picks up where Isaac Florentine left off and never strays from what worked before. This film has high flying kicks galore, evil villains that an audience loves to see battered before their eyes, and it carries enough stylish flare (and no hyper edits and shaky cam to distract the viewer) that it easily matches its predecessors. It even throws in a nice bit of gun work at the end just for good measure.

Is there any better parallel to Boyka’s quest for personal redemption in becoming the most complete fighter in the world than the similar journey that the straight to home video action genre has gone through to be respected as its own art form? Boyka: Undisputed 4 is further proof that the journey itself is a fascinating one, full of off the beaten path successes that rely on the basic foundations of strong characters, fantastic core execution, entertaining prospects, and hard work. On its own, this film is both massively entertaining and impressively heartfelt leading it to be the best of the series. I cannot recommend it enough. In the realm of great, underappreciated action classics, Boyka remains a champion and this fourth film is his title bout.

Written By Matt Reifschneider
Posted by DarkReif at 2:50 PM