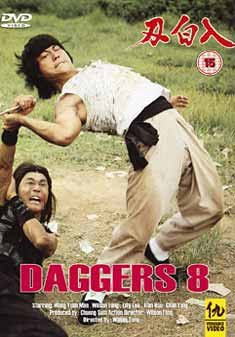 Truthfully, I stumbled into Daggers 8 on accident. The trailer for the film was randomly suggested to me on YouTube after watching something else martial arts related and I was sold. The film looked like the perfect blend of camp, strong action, and silly gimmicks. While Daggers 8 is not nearly as perfect as one would hope in balancing those three things, all three are most certainly available for those to enjoy as the film plays out. The weakest element of the film, despite the awkward dubbing, is the story which has our hero, played with the silliness and arrogance of early Jackie Chan knock off roles by Meng Yuen-Man, leaving his life under his scholarly father to pursue the life of becoming a kung fu expert. Along the way he finds three different teachers, but all three are mysteriously killed by the same assassin (played in straight face by Wilson Tong) who deals in effective killing styles with his titular eight knives.

Daggers 8 plays it all pretty straightforward, outside of one twist in the end about who hired the assassin that’s been hunting our hero all along, and often that’s the downside of the film. It’s predictable and even the handful of twists at the end are littered with plot holes. Our hero, while charming as he may be in performance, is nothing new either and he runs tropes in being the arrogant young student who must learn the reasons of kung fu along with the skills. The real highlight of the film, outside of the action, is the secondary cast. Each of his teachers, despite limited screen time, are delightful to watch in their interactions with our hero and a big part of me wanted more of them, their stories, and development. His second teacher, who teaches our hero agility and tumbling skills, in particular seems to get less than stellar development which does hinder the overall film experience. His other two fair much better and often steal plenty of moments in the film. Partner this with Wilson Tong as the villain and the film is littered with gimmicky characters that make it a massively fun watch.

Daggers 8 is filled with a lot of fun action, punctuated by fast and tight choreography and brimming with gimmicks (the vest our hero wears in the finale is brilliant B-kung fu material.) The characters are all fun to follow and charming in their moments of screen time, but the film’s lacking story and plotting make it something of a hollow experience ultimately. Still, it’s a decent find for kung fu fans and one that gets a recommendation despite its flaws. Fun and entertaining as is. 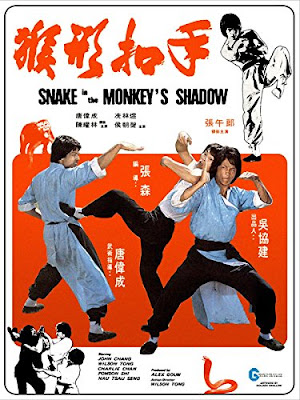 In a lot of ways, Snake in the Monkey’s Shadow is obviously a knock off of the Yuen Woo Ping and Jackie Chan vehicle Snake in the Eagle’s Shadow that saw success the previous year. It’s not just in the name either. The film centers around a young man who desperately wants to learn drunken fist technique from a local teacher after he’s bullied by some rich guys. He’s made the local cleaning guy for the school and practices what he sees at night before the teacher finally starts to officially teach him. Throughout the course of the film, he gets involved in some martial world challenges through his friend, a Monkey style master, and the hijinks and action soar from there. Sounds a bit familiar? Like many of the films from this era, the film requires a blend of comedy and crisp action to find its momentum. It’s rarely original in anything it does, which is the main issue of the film as it seemingly runs the tropes as it goes, but it’s hard not to enjoy it on a surface level.

Truthfully, the reason that this film as accrued a strong cult following is the charm it carries with it. John Cheung Ng-Long has a knack for holding down the film as the anchor for much of the humor and action, but the film has a strong secondary cast that really help him out. Whether it’s the Snake assassins (one being Wilson Tong) or the Monkey style master played by Pomson Shi, this film is just a lot of fun and easy to watch. Credit does have to be given to Hau Chiu-Sing as Teacher Ho who steals quite a few scenes with his weird dead pan looks that go strangely against the grain with the usual over the top dubbing. This is partnered nicely with the strong choreography and fun fight work, which includes some very entertaining and silly drunken monkey techniques.

Although as a side note, the version I watched seemed to have at least one sequence edited from it in the third act. The film builds to a sequence where I real monkey and real cobra fight, but it never shows it even though our hero seemingly learns monkey fist from a sequence that isn’t in the film and then teaches himself a new style from there. Not that it’s a huge deal, the third act feels a tad rushed anyway to get our hero into learning a drunken monkey style, but it is something that seemed to stick out to me ultimately.

While the film falters in following the tropes of the genre too closely at times and occasionally seems to be off center with its dubbing and sound work (the snake noises that the assassins make gets pretty annoying by the end), Snake in the Monkey’s Shadow is a ton of fun and one that many martial arts fans will enjoy thoroughly for its charm, strong performances, and memorable fight sequences. It’s not a film that sets itself out wildly from the rest of its peers, but it is a film that will appease those kung fu fans looking for it.