New Battles Without Honor and Humanity (1974) 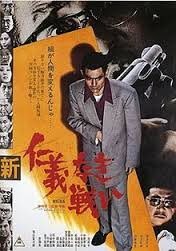 Kinji Fukasaku’s intense and impressively crafted original Battles Without Honor and Humanity series was perhaps the epic highlight of his career with dense character builds, massive gangster plotting, and gritty execution of striking effectiveness. It was also notably popular with theater goers in the mid-1970s that pulled in some serious box office revenue. So it’s perhaps not all that surprising that Toei would eventually want to keep it running. By eventually, I mean that the first entry of the New Battles Without Honor and Humanity trilogy would be released the same year as the fifth installment of the original series. Toei and Fukasaku didn’t waste any time, I suppose. This new chapter of the series, with no connection to the original five, would see the director and new writers Fumio Konami and Misao Arai start to take the franchise in a new direction with three unconnected stories using many of the same principal cast members from the original series as new characters with new stories to tell under the banner. The results, while intriguing, are mixed and don’t nearly hold a candle to the original run. The first film of the series has its merits and stands on its own decently well, but considering some of the phenomenal films that Fukasaku released in this period it does seem to be a step back in quality which should be noted even if fans are certain to find plenty of enjoyment out of them.

For the first of this “reboot” trilogy, New Battles Without Honor and Humanity revisits a lot of the same themes, character traits, and concepts that the original series covered over the five films released in the years prior. In a way, this is problematic for the film as it simply can’t compare to the execution and writing of its predecessors. Many of the issues that arise in this entry are due to the writing of the film itself, which lacks the depth, subtlety, and immense networking of characters that made the previous entries so phenomenal to experience. It attempts to hit many of the same thematic set pieces as our hero, Miyoshi (played once again with intense and screen devouring presence by Bunta Sugawara,) sacrifices a good chunk of his life in prison on a failed assassination attempt assigned to him by his boss. He’s released, more mature and perhaps a bit smarter in his intent to play the yakuza chess game more effectively, and finds himself in the crossfire between the head hauncho and a conniving lower boss, who is played in an almost unrecognizable manner by Tomisaburo Wakayama in a stark contract to the sheer intensity and straightforward effect of his assassin role in the Lone Wolf and Cub films. The intent is intriguing as New Battles would attempt to recreate many of the same plot elements of the original Battles film, but the writing is not quite as tight and effective as before and flounders for much of the middle portion of the film as our protagonist is bounced around like a ping pong ball between two increasingly violent bosses and increasing tension.

There is an interesting sense in New Battles that the character Miyoshi has simply gone from one prison to another, but the film fails to capitalize on the subtext of that idea beyond a general tone. The manner that he is trapped by his position between his bosses and the subtle detail that every time he travels he must get it approved by some government authority adds to this tone. Unfortunately, the film doesn’t necessarily use its concept to maximum effect as the characters all seem weirdly disconnected from one another (perhaps intentionally?) and there are only a few highlights in New Battles that seem to work, including a smaller role for Hiroki Matsukata as a fellow inmate who befriended Miyoshi. Truthfully, the one thing that perks the most interest and works as a slightly more unique approach to the film is the arrival of Reiko Ike as a Korean call girl that Miyoshi makes a connection with. However, she is only in a few scenes for a brief stint before disappearing from the plot. Ike and Sugawara have impeccable onscreen chemistry and the previous Battles films rarely had any female characters of any importance so it’s this secondary plot in the film that stands out the most.

For fans of the Battles Without Honor and Humanity, the extension of concept that is New Battles Without Honor and Humanity will satiate the craving for realistic and gritty yakuza material. It’s not nearly as effective as most of the original series and still falters a bit to other films from the era from Kinji Fukasaku (Arrow Video also released Cops Vs Thugs recently which is one of my favorites), but it’s still a strong film with some great performances and impactful moments. The release that Arrow Video dropped does have a nice interview on it that goes into the trilogy of films within context of their release and the booklet has some fascinating pieces in it on each film for those collectors looking for features. The booklets in these Arrow releases always come out as highlights for these sets for me. New Battles Without Honor and Humanity may not be his best, but it’s still a worthy little side stepping reboot for fans of the style. 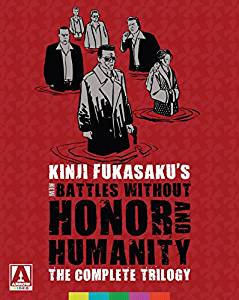