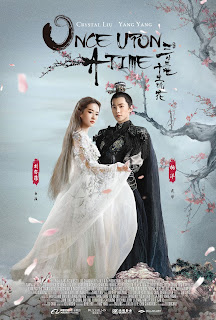 I will admit, I had no clue whatsoever what this film was going in, which is the purest mindset you can go into a cinematic voyage with. I was told "You will be reviewing a big budget Chinese fantasy romance film", and I said "Cool!". As I sat down, and prepared myself for a visual treat, I was immediately sucked into the world, and then spat right back out as I began to realize that the visuals, and everything else for that matter, weren't quite what one would initially think. Confusing? One moment...

This film frustrates me on so very many levels, and I believe will cause my review to be a train wreck, which I guess would echo this epic heap of scattered, burning garbage. Once Upon a Time, which I wish never would've seen the light of day, tells the story of Bai Qian, a Goddess and monarch from The Heavenly Realms, who is sent to the world of mortals to undergo an extreme trial to become a High Goddess. Sadly, only a week after seeing this movie, I had to essentially reword Well Go's plot synopsis from their website. I apologize, but it's that unmemorable. The things that have stuck with me though, are the things so awful that I could just list them and be done, but I will try to be a bit more professional than that. Anyway, I digress... and so Bai Qian meets a guy there, they "fall in love" and an old enemy resurfaces to wreak havoc in their lives. If it sounds good, well let me reassure you, it isn't. 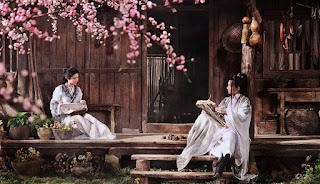 Once tries so very hard (I think it was trying at least) to be so many things at once... (*sigh*): a romance, a live-action Disney movie, an epic, a fantasy / adventure, and a family comedy film(?). It is lifeless in performance from the two leads first and foremost. They have about as much chemistry as two pieces of wood that just lay their inanimately, not having the slightest clue that they are wood and can't actually fall in love at all, as they can't think. They both look pretty, but that is just surface level. Not to mention Bai is drunk for the entire first half of the film and constantly acts utterly ridiculous, then lo and behold, she falls in love and isn't an alcoholic anymore. Funny! No, but you know what is funny? Seeing a cute, adorable and seemingly innocent child get drunk with her and then pass out from copious amounts of alcohol consumption. That's hilarious (as in it's not!!!)!

Where the film lacks in character or charm, it also lacks on a technical level. Now, there are a couple, and I mean only a couple of nice shots throughout, but most of it suffers (I'd say a good 90% or better of the overall picture) of being shot entirely on a blue screen. It looks like Tommy Wiseau's The Room if it had a big budget. I very rarely went "wow" and instead found myself laughing miserably and pointing out to my wife, who wasn't even watching the film with me, and watching her react as we both constantly laughed at scenes that I am sure had no intention of being laughed at. There is an action scene towards the end, where the two (leads) fight a giant CGI creature, which did have a nice design, but then they combat this giant beast with strands of cloth, of all things. If she is a Goddess, why doesn't she just obliterate it and move on? 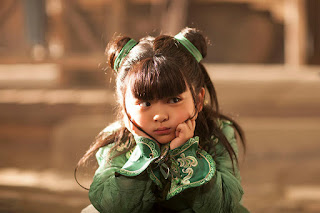 I honestly haven't seen too many awful movies so far in 2017, aside from the last Resident Evil installment, which gave me a migraine, and that A Dog's Journey thing, both of which I sat through in a theater of all places, and this mess makes those films seem competent in comparison. This film is an utter failure from the first frame to the very last, and the most unfortunate thing of all, is that they thought it would be okay to put in their very own Jar Jark Binks-like character, by way of a cabbage monster guy. Why!?!?! If you want to sit down and have a good laugh, then by all means, give Once Upon a Time a go, but if you'd literally rather do anything else even remotely enjoyable than self torture, then run... run as fast as you can, and stay very far away from this thing. Easily the worst film of the year!