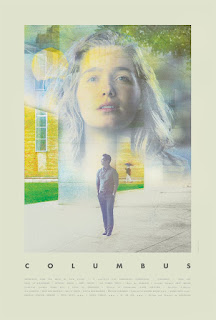 Columbus, Indiana. . . the place I have lived most of my life. I want to say this before making headway into the review, as I hope that there is some sort of perspective that I can bring while speaking of Columbus, based in the place in which I have spent the majority of my life. Did I ever think that something would be shot here locally? No. Seeing this work, I must say, I am glad that it has happened, and while it most certainly gets the architecture and beauty of Columbus very much correct, I do think it sort of lacks exploration of the people of the town, and the darker side of things, but I digress. I want to base this on its own merits, and with that in mind, I have ended up being pleasantly surprised with Kogonada's directorial debut.

John Cho plays as Jin, a man who comes to the city of Columbus, to visit his ailing father, a renown architect, who has found himself on his deathbed. It is clear from the get go that Jin isn't attached to his father whatsoever, but more on that later. He is staying in the Inn at Irwin Gardens, which is an absolutely beautiful place to be, though it seems unrealistic for someone to be staying there so long. I suppose a man of his stature and social sensibilities could do so, but regardless, there he stays, and one day while outside, walking through the side yard, he happens to be greeted by a young woman, Casey, whom is working at the library next door. She offers him a cigarette, and these two strangers hit it off and form a simple relationship, as talk of architecture and academia build a quick bond between the two. As the film carries on, in a very slow and serene fashion, we begin to learn more about these two human beings, and realize that they are not so different, and that humans all have that single common thread of connectivity and family, regardless of their walks of life. 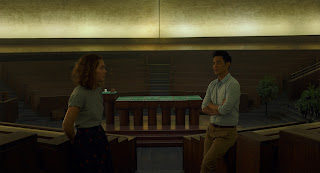 I don't want to go too much into the story, as there isn't honestly much of one here. It is a decent set up, that realistically allows these two people to come together, and it works. At first, the philosophical banters of the characters, and particularly the man in the library, who obviously has a crush on Casey, quickly annoyed me and I wasn't sure I could get on board with it, as again, people don't really act like that around here, but once I was able to let go of any preconceived notions, and just allow myself to sink into the picture, and these characters, I found myself growing attached to both Casey and Jin, and the more the drama, albeit understated, began to set in, I was completely sold. Some of the darker bits that come to surface really hit home, for better or worse, and made me realize that these are problems we all face, regardless of location, or once again, or position in life. The lesson of learning to let go and grow as an individual, in many ways than just one, is well told, without ever being preachy. It's clear that Kogonada, who also penned the screenplay, is a smart man and knows cinema, but sometimes the dialogue gets a bit too heady for its own good.

The one thing that I hear locally all the time, which I was surprised that Columbus sort of nailed, was the idea that there are always people, myself included at one point, who want to leave Columbus, but there is something that lures you back every time. It's almost as if one feels trapped here, but at the same time it's home, no matter how much you want to deny it. It may be hard to explain, and I possibly didn't portray it so well just now, but needless to say, I could relate very much so. The architecture is iconic, and the city becomes a character itself. I think at times it gets in the way of the human elements, and feels more like a postcard or tour brochure than a portrayal of natural beauty, but what other cities get this same treatment all the time (looking at you, L.A and NYC)?

I was very surprised with this one. You think that a film set in your hometown is by default, sort of going to not be so great, but I am so glad I was wrong. Again, I wish we could've seen some of the ugliness that lies within the city, to juxtapose all of the beauty that is presented onscreen. I may be speaking from having explored all sides of this place, but for the story that was being told, it really resonated and felt very human. Large beauty through architecture, conveyed in a small and intimate human drama, that never falls into melodramatic tropes. It stays fairly quiet, but remains subtly powerful from beginning to end.

Columbus is slow going film, that I'm not sure will resonate with all of the locals, as most movie goers here kind of just like the big Marvel films (typically), but I am really hoping it does well, and not just in Columbus, but elsewhere. This is one of the better surprises of the year for me. Kogonada may wear his influences on his sleeve a bit too much at times (Ozu, Hou Hsiao-hsien, Weerasethakul), but one thing is certain, if you are going to borrow, then why not do if from the greats. Though most certainly not without its flaws, Columbus most defintiely comes recommended by this local. See it!