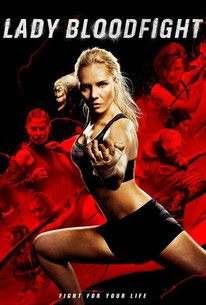 Having tempered expectations when going into straight to home video action flicks is usually the smart approach to appreciating the genre. Not that the style doesn’t have its merits, as I mentioned not to long ago in my review for Boyka: Undisputed 4, but the smart approach usually means you’ll have more fun in appreciating them for what they are. This is the case with Lady Bloodfight. On paper, the idea of a Bloodsport/Kickboxer knock off seems predictable and unnecessary, yet the attached stuntwomen and talent behind the film would indicate it would be something much more effective than the trailers and hum-drum concept would indicate. While this is true, there is much more to Lady Bloodfight than its ‘been there, done that’ plot and narrative would have one believe, it’s still a mixed bag of efforts that is benefited from one’s skepticism of the entire thing when going into it. For fans of the martial arts tournament films that ruled the lower budget realms of the late 80s and early 90s in western action cinema, Lady Bloodfight has something to offer in its modernized throwback style but it certainly trips on some of its own ambitions as it goes leaving the entire thing feeling a bit mixed. Yet, it’s hard not to be pleasantly surprised with it in the end. It’s fun, it has some great moments, and it showcases that Amy Johnston can hold her own as the lead in a film.

It's the Amy Johnston angle that truly seems to be the biggest surprise in the entire film. There is quite a bit of talent involved in Lady Bloodfight, including Bey Logan as a writer and producer and Chris Nahon as the director (who provided one of the best westernized martial arts films of the modern era with Kiss of the Dragon, but also provided one of the worst anime adaptions with Blood: The Last Vampire), but it’s the slew of stuntwomen and men turned actors that anchor the film’s appeal and cinematic charisma. Amy Johnston, while cornered into a predictable protagonist role that essentially launched Jean-Claude Van Damme’s career just a handful of decades ago, holds her own and delivers a nicely resonating emotional foundation to her obvious abilities to fight and hold the screen with her ass kicking fight work. She’s supported by some gimmicky, if not entirely outrageous, secondary roles including the slew of villains (highlighted by the usual vicious and soulless opponent in the form of a scarred Russian fighter) and a much too small role for an Australian side kick who loves to mouth off and steals many of the scenes. Yet, it’s Amy Johnston that holds this film together when it hits shaky writing or forced emotional exposition. If anything, Lady Bloodfight earns a few victories on the sheer power of her screen charisma and fans will appreciate that.

Truthfully, the predictable script and rather straightforward narrative don’t necessarily provide a lot of unique flavor outside of the usual corruption and gimmicky villains that offer the tension, but the film uses its tropes to its advantage by allowing the film to be an easy to consume and entertaining affair. The rest is problematic at times as it shoehorns in a gambling subplot that feels unfinished and silly in the last minutes of the film and tries desperately to add a sort of spiritual thing at the very end with our heroine’s ghost dad. There are other times though where the film tries to ambitiously pull off the unique process of explaining some of the core fundamental discipline aspects of marital arts training. This is most effective in how our heroine’s teacher approaches her learning compared to the rival student and her teacher’s heavy-handed discipline over learning technique. It’s a tad too Karate Kid at times for the sake of the westernized audience it is appealing to, but it’s ambitious enough to work just enough to sell the entire idea.

In the end, Lady Bloodfight is a predictable martial arts tournament affair plagued by some scripting and narrative issues, but it has a lot of fun with its gimmicks and just enough emotional resonance anchored by Amy Johnston that fans of the style will have fun with it. It’s a film that will not find a huge audience outside of those already interested in it, but for those intrigued it’s a film worth burning an hour and a half on.