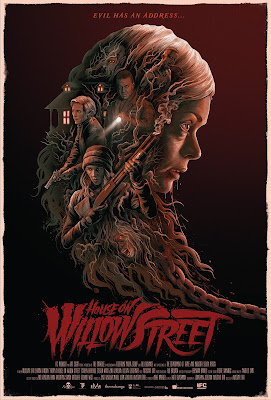 One of the things that I love and hate about IFC Midnight as a distribution company is that the films that grab for release can be of varying quality. Not just in the scope of various niche genres underneath the banner of modern cult cinema, but even in quality of execution. House on Willow Street was a flick that I had decent expectations for. The trailer was solid, it had lofty production values, and the simplistic concept had me sold right away as four kidnappers accidentally kidnap  a young woman who may not be what they think she is. Unfortunately, the film is much more hit and miss in its execution than it should have been. For every fantastic moment and inspired horror punch, there is one that’s almost stunningly silly and off the mark. It leaves House on Willow Street to be an entertaining film in the end, but hardly as effective and impressive as one might expect.

Right away, House on Willow Street takes a rather dark and gritty tone despite its slick and more mainstream horror production looks. Our four kidnappers, roughly connected and very loose with their morals, are the main protagonists and the audience is thrown in as their unofficial fifth member as they begin to plan their scheme to snag some diamonds from a rich businessman by kidnapping his daughter. Even in the first act, the first signs of potential problems for the film arise as it’s evident the structure will not be as effective as it might have. It leaps forward six weeks randomly from the team’s kidnap planning party to the actual night of the event and it leaves a weird aftertaste that perhaps the film’s script is not going to be as tight and as immediate as it needed to be. As the film plays out, the structural flaws and writing continually showcase some major issues, being highlighted in perhaps the biggest misstep of the film at the midway point by having our four kidnappers stop everything to watch a video that explains everything about the horrific situation they are facing. The film already had some issues throughout about really forcing the exposition in its dialogue, yet it writes in an entire sequence that feels like forced exposition that just stops the entire momentum dead in its tracks. This happens time and time again as characters do weird things out of character, make silly choices, and continually feel a tad unnatural in their interactions that undermines a lot of the good things that the film has going for it.

However, if one is willing to overlook the problematic script and the structure flaws, there is quite a bit to enjoy about The House on Willow Street. Director Alastair Orr embeds the film with a distinctively visual tone that is more akin to an action thriller than a horror film. It gives the film a kind of unexpected edge, particularly in the final act when things start going a bit beyond bonkers. At times it even toys with the genre, starting off as a thriller when the kidnappers go to grab the girl then increasing the tension to bleed into a haunted house meets possession horror flick before going full demonic monster madness in the final act. The effects are remarkably solid at times, particularly for a low budget South African film, as it combines some solid visual effects (the spiny tongues are genuinely creepy at times) with some fun make up and practical effects. When all of these things are in proper balance, including a sequence where two of the kidnappers return to the titular residence to find the parents of the kidnapped girl, the film works with some real impact. When it doesn’t, it glaringly shows its foundational flaws and it undercuts anything great it had going for it.

While House on Willow Street isn’t necessarily a bad film nor a great one for IFC Midnight, it is a film that’s both good and bad. From scene to scene, the quality of the material onscreen can vary immensely which leads the film to being underwhelming overall, but it’s still entertaining and the idea is sound enough that it kept me hooked throughout its brief run time. The action thriller style of the film partnered with the darker content is appealing enough and the style mixed with some strong lead performances makes it worth the viewing, even if the script needed a few more drafts to work out the awkward kinks of dialogue and structure. Considering it’s already available on Netflix Streaming in the US and it’s decently cheap at most bigger stores like Best Buy and Wal Mart, it’s worth the time for horror fans. Just go in with the proper expectations and enjoy it for what it is.

Written By Matt Reifschneider
Posted by DarkReif at 8:12 AM