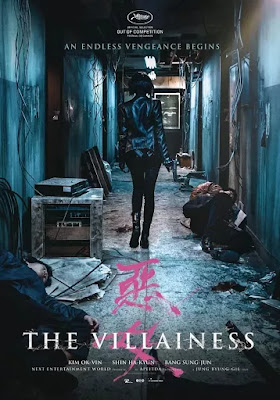 The hype machine can be a film’s dream come true for the box office numbers and sales, but it can certainly wreak havoc on someone’s expectations going into the film too. This was one of the reasons that I attempted to keep my hopes down for The Villainess. The trailers sure did look slick and fun, but the tidal wave of positive and gushing reviews almost seemed too good to be true for a film that looked like John Wick collided with Hardcore Henry with Korean cinematic flair of The Suspect. Yet, as the credits rolled on The Villainess there was an aura that the film wholly accomplished what it intended and did it admirably well considering some of the potential pitfalls of its story and stylistic choices.  It’s not a film for everyone. It’s not a film that intends to be an arthouse experience with action like so many Korean films attempt (and/or accomplish) at being. It’s a film that intends to be an action film of high caliber and one that writes a love letter to the genre with all kinds of variety and style.

Perhaps ‘the love letter’ intent is the main component to understanding what The Villainess is bringing to the table. In a lot of ways, it separates itself from the majority of Korean action films by not building its foundation on thriller set pieces. Not that all of them do, before anyone calls me on that, but I would say the majority of them certainly intend it to be that way to drive their dramatic tones. This film is much more dedicated to being a kaleidoscopic love letter to all forms of action cinema: blockbusters, stylish grindhouse affair, arthouse, etc. At its core, it's the gritty visual scope of modern Michael Mann through the style of John Wick meets Hardcore Henry, built on a narrative foundation that is the subtle character driven core of early Luc Besson flicks like Le Femme Nikita and Leon with the sheer action outrageousness and creative force of John Woo. It's truly a kaleidoscope of action style, packaged in a manner that uses the Korean cinematic landscape simply as a launching pad for a more internationally flavored experience. It's not perfect, but the blend is ambitious and impeccably paced to deliver the thrills, kills, and bus spills that the hype is building up. In this manner, even when the script is throwing around a lot of silly ideas or seemingly sprinting through its second act, it still works impressively well. It’s easy to forgive the film when it is so confident in its mish-mash of style. It’s a bombardment of action and tropes wrapped up so strangely and effectively that the bumpy foundations seem intentional as homages to films of the past that succeeding and driving the genre forward.

Now, something of this manner could not have been pulled off unless the execution followed suit and, in the case of The Villainess, it does. Like much of the recent outpour of South Korean cinema, the production values are seemingly top notch and the gritty, intense tones of the action sequences, which often seem to be a mixture of Bourne and Hardcore Henry in their focus, is intentionally done to be a counter point to the rather slick nature of much of the film’s dramatic set ups. It can be overwhelming for more traditional action fans, but the manner that director Jung Byung-gil accomplishes the task is impressive to say the least. The first person opening action scene is a modern martial arts gang fight on drugs and the finale is a layered and perfectly paced experience that drives the culminated emotional tension and building action home. Just wait for the bus sequence and that is all I will say about that. The director most certainly has a strong anti-heroine to anchor the film around, both dramatically and physically in the action set pieces, and he uses her and the surrounding set of secondary characters to balance out the pacing impressively well as it shifts from brutal action to intriguingly deep emotional moments.

Perhaps his biggest trick in his sleeve is the almost dream line narrative structure of the film. Once the action is in place after the opening, the lines of the usual structure are blurred as our heroine’s life is presented in a kind of stream of consciousness style, taking her current life as being a trained agent and fading in and out of her past life introducing the various characters, events, and emotions that are required for the story to be told. At first it seems a little confusing, but as the pieces of her life puzzle all fall into place, it comes across as a brilliant way to approach the usual tropes of the story without being as straightforward as the film’s peers.

The combination of its stylish approach, the highly impressive execution of performances and visuals, along with the jaw-crushing action and almost dream like narrative structure make The Villainess a truly fascinating cinematic experience. It’s brutal, often heart-breaking, and all the while it never ceases to entertain its action craving audience. As mentioned, the genre tropes are used in a major way for the film and its spins on the usual action and structure around it may not appeal to the usual fans, but for any kind of action junkie than I cannot recommend it enough. The Villainess has no problems ripping its audience from the edge of their seats.