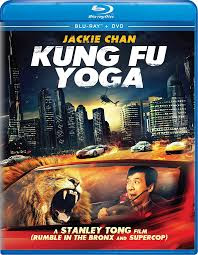 Stanley Tong and Jackie Chan have produced some phenomenal films together. Starting with Supercop (or as the rest of the world knows it, Police Story III,) the two have made some highly entertaining pieces of Hong Kong action spectacle. Even if their most recent output together has been less than stellar - The Myth was the last one that Tong directed, although he served as a producer on both Chinese Zodiac and Dragon Blade – it’s still a tempting combination that proves to be interesting. This leads us to Kung Fu Yoga, the massive money making hit in Asia, that sees the two reunite for another globetrotting comedy action adventure film. If anything, the conceptional idea of combining Hong Kong and Indian cinematic values is fascinating and on that level Kung Fu Yoga works as a kind of outrageous spectacle to be had that focuses on being more family friendly and easy to consume than anything else. On any other level, Kung Fu Yoga is a chore to watch and often sacrifices everything to try and awkwardly smash a Bollywood influenced essence into a modern Jackie Chan adventure flick like Chinese Zodiac. The results are awkward are best.

Jack (Jackie Chan) is a revolutionary archeologist and one of the most knowledgeable and talented professors of history that China has to offer. When an Indian professor (Disha Patani) shows up on his doorstep with a map to find a lost treasure from an ancient time when India and China combined forces, they will take their various assistants and a rogue treasure hunter (Aarif Rahman) across the globe in search of it before an evil businessman (Sonu Sood) beats them to it.

Truthfully, Kung Fu Yoga is the next step in evolution for the entire “Jackie Chan hunts for ancient treasure” series of films. While most of those are part of the Armor of God franchise, this one would fit right in as a continuation on the more family friendly changes present in the last film of that series, Chinese Zodiac. Which is how the film should be viewed, as a family friendly adventure flick in line with the silly villains and campy characters present in the cartoon series Jackie Chan Adventures. Trying to take the film as anything more than a film meant to please parents and their young children with its broad ‘worldly lessons’ and silly comedic slapstick action is futile and ultimately frustrating. I suppose for every Police Story: Lockdown we are going to get a Kung Fu Yoga at this point.

Immediately, Kung Fu Yoga showcases its childish appeal as it starts by giving the audience a thorough rundown of the Indian/Chinese history lesson that the treasure of the film will represent and why it requires both Chinese and Indian actors/actresses to solve its mysteries. Sounds too heavy for kids? Well, don’t worry because all of the history is shown as an animated series of action events to make it easier to understand. Sure, it’s helpful for those youngin’s in the audience, but for a seasoned Jackie Chan fanatic it’s an awkward way to go into the movie. Still, it sets up the cartoonish tone and outlandishly simple and forced exposition dialogue that will grace the rest of the film and the family friendly concepts that it will use. It’s a rough start, but it serves its purpose well enough.

The rest of Kung Fu Yoga is much more aligned with the usual Jackie Chan mainstream material. The action is most definitely a throwback to previous times he has worked with Stanley Tong, in particular some of the gimmicks of films like First Strike seem present here as he gets into fights around snake charmers and in an icy cave where everyone is sliding around, but occasionally it goes a bit more modern. An entire sequence that has Chan in a massive car chase through Dubai with a CGI lion in the vehicle suffers from the overzealous computer effects, but it maintains a fun pacing and some pretty silly humor that works. Don’t take it seriously though. If you start to do that at anytime, it will remind you with some terrible dialogue and forced performances to remind you that this film is not on that level.

It should also be mentioned in this review that Kung Fu Yoga, that the film suffers from its extensive cast too. It’s obvious that there is meant to be a grand tone to the entire thing with all of its globe running and combined casts from China and India, but it suffers from jamming in so many. While some of the secondary cast get some decent screen time, including Disha Patani and the intimidating size of Sonu Sood, even they don’t get much in the way of any real characterization to add to the plot. The rest of the cast gets even less and they become two-dimensional representations of people. It’s enough so that some of the action that’s given to them has no resonance. A potentially fun scene that has Jack’s assistant, played by Yixing Zhang, saving two of the other assistants from a pack of hyenas has no tension or power outside of the gimmicks. Even then, most of the animals are CGI and it just undermines it even more.

By now, it’s probably very clear that while Kung Fu Yoga would have appealed to my 8-year old self, it’s a film that’s awkward as it fails to establish any kind of grounded sense of cinematic foundation beyond just being entertaining. Its appeal is in its flashy colors, worldly settings, and occasionally fun action sequence, but it’s hardly enough to carry the bulk of its patchy script and lacking character work. I am tempted to give it a bonus half point for throwing in an Eric Tsang cameo (a useless one that culminates in a snowball fight with CGI wolves (?!)) and being so outlandish that it’s hard not to laugh at how awkward it is (two words: lion vomit), yet it’s probably a film that I will only revisit as a Jackie Chan enthusiast…and even then it will be very rarely.

Written By  Matt Reifschneider
Posted by DarkReif at 4:07 PM