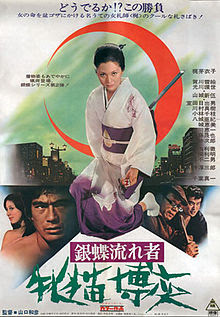 If you look back to when the review for Wandering Ginza Butterfly was posted here at Blood Brothers, you’ll see that it happened well over a year prior to the posting of this review. If you read that review, you’ll also see that the film was a disappointment for me in its scattered approach and uneven genre bending that it attempted to do which, while putting two and two together, are inherently connected. This gap waiting to watch the second film of the series, Wandering Ginza Butterfly 2: She Cat Gambler, is essentially intentional as there needed to be time to cleanse the palate before digging in. However, this may have been a mistake. She Cat Gambler not only partners the iconic Meiko Kaji with Japanese superstar Sonny Chiba for the film, but it’s a more cohesive and impressive film overall. It has impressive star power, a more effective script, and an execution that gets everything to meld into one much more striking cinematic experience.

For starters, outside of a few moments and details used to flesh out Meiko Kaji’s gambling ex-con lead character Nami, one doesn’t necessarily need to see the original film to be able to understand and enjoy what She Cat Gambler has on the table. Seeing the original, as a sort of origin story that sets the tone and character up initially but rarely does anything with them, serves only as a comparison level for a viewer to appreciate just how much better the second film is as a cohesive experience.

At times, She Cat Gambler doesn’t even feel like a sequel as much as its own film as it sets about establishing Kaji’s anti-heroine and a slightly revised back story that has her gambling father was murdered before her eyes as a child. This, of course, is relevant because in her travels she finds out that her father’s killer is in town and she needs vengeance. This comes about as she helps a young woman, played as a damsel in distress in decent contrast to Kaji’s cold, sharp, and subtle lead, from being sold into prostitution by her own father. The parallel that the titular she cat gambler is now a guide for another young woman works wonderfully with the script, particularly as the narrative goes on and the plot becomes more morally gray and complicated when yakuza become involved and Sonny Chiba’s stuttering and good hearted businessman befriends our heroine. The film works smoothly though, only stumbling a bit in getting one of Nami’s old friends into the script for an obvious plot device later in the film, and She Cat Gambler takes its story and gradually builds it until it erupts into a shockingly violent third act.

The themes and strong narrative structure are only part of the appeal of She Cat Gambler though and, like many of the various yakuza films of this period, this film finds a strong balance between a more serious character driven and thematic plot and its entertaining exploitative portions. Fortunately, it doesn’t try to genre bend nearly as much as its predecessor (which did have an intense game of pool, I suppose) but it still manages to entertain. Kaji and Chiba share an impeccable chemistry together on screen, particularly by the time the third act rolls around, and the film has enough gimmicks and villains to quench the exploitative thirst of most fans of this style of film. The villains are perhaps the least memorable though, as they stand firmly as corrupt gangsters in suits, but the film does enough twists and to keep it moving and interesting. As mentioned before, the final act is spectacular as it hinges on an explosion of violence centered around Kaji and Chiba doing their thing. Fans will not want to miss out on this.

The lesson was learned though. Don’t delay a viewing of Wandering Ginza Butterfly 2: She Cat Gambler. The film is a massively leap up the ladder of quality from the original and the combination of Meiko Kaji and Sonny Chiba proves to be as entertaining and charismatic as one could hope. The film has a wonderful depth to its characters and plot, but never sacrifices its exploitative yakuza elements for its dramatic heft. It’s entertaining and thoughtfully executed. Fans of either star, the director, the series, or yakuza movies in general are encouraged to check it out. It’s a fantastic problem knowing that this series went out on a high note.