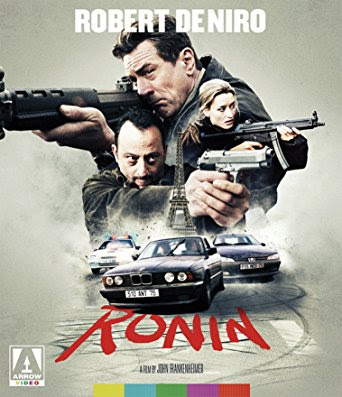 Director John Frankenheimer had a long and quite fascinating career. While he was mostly known for his work the 60s and 70s (with credits like The Manchurian Candidate and Birdman of Alcatraz under his belt) he would have a variety of hits and flops throughout his lengthy filmography that makes it one of the more interesting careers to follow. One of the gems of his career though is the 1998 throwback espionage action thriller Ronin, featuring a substantial cast anchored by Robert DeNiro. While it’s somewhat of a surprise that Arrow Video chose this film for release in their catalog because of its ‘newer’ release date, it shouldn’t be a surprise when one sees the film and the quality of its execution to understand why it’s become a well-loved cult classic. Not only is Ronin a phenomenal flick, but it’s one that truly does harken back to a 70s style of action film making where the tone and the subtle feel of the film highlights its strengths. Sure, it might have looked even better when it comes after the strange misfire that was The Island of Dr. Moreau in 1996, but the film has remarkably held up after nearly 20 years and it deserves the following it has garnered.

Sam (DeNiro) is just one of a handful of various criminals that have been approached by Deirdre (McElhone) for a very expensive and high stakes heist. The problem Sam has with the entire thing is how secretive it is. None of the people know each other and they don’t even know what the package is that they have been sent to steal. Using his wits, connections, and a new-found friendship with a French thief (Reno) Sam is going to have to navigate a very dangerous job where nothing is ever quite what it seems to be.

For a film that was sold as an action film (which does in fact, feature some fantastic action sequences that I will get to in a bit), Ronin is a film that uses its atmosphere and subtle character builds to be more akin to one of Frankenheimer’s 70s films in tone than anything that was released in 1998. The European setting helps give the film a slightly old-world feel, particularly when they use tourist filled ruins and the smaller streets for a lot of the action set pieces in the film, but a lot of the film retains its tone and atmosphere thanks to the rather sly writing style of the script and Frankenheimer’s old school approach to direction. Ronin is not a film that likes to give a lot of context for the events previous, during, or after the main plot plays out and it uses the lacking back stories and details to craft its espionage feel where nothing feels like what is being fed to the audience. This allows the audience to connect with Sam, despite the fact that he seems to be the most talented and knowing of the crew assembled for the heist, as he starts to question everything that he has been fed too. The film anchors its vague build with its phenomenal casting, anchored by Robert DeNiro who hadn’t quite fallen into the rut he currently resides in as an actor, and surrounding him with plenty of actors and actresses that can take subtle pieces and imbue them with dynamic moments. The subtle bromance between Sam and Vincent is the stuff that heroic bloodshed films were built on and the way that the mystery around the elements of loyalty and betrayal unveils itself is impressive.

Occasionally, Ronin can be a bit too vague for its own good and outside of a few missed moments in edits or the use of CGI (the tire smoke in this film makes me cringe on the inside,) it’s perhaps the one major flaw of the film. Hints towards a more substantial romantic subplot or a larger conspiracy at hand are there to pull the audience in, but, in particular with the former, it ultimately leaves the film feeling a smidgeon hollow in the end. The extended alternate ending which is included on this release helps a bit with some of those feelings, but it’s still something that undermines the rest of what could have been a perfect heist caper. The rest of the film, even in its vague character relations, backing story, and or possible covert government elements makes Ronin feel almost more like an Agatha Christie mystery at times than anything else and that approach gives it a unique atmosphere that works.

Of course, the one that that most people remember about Ronin is the film’s impressive action sequences. If there is one thing that this film does better than most anything else it's the robust and impeccably shot and paced car chases. Weaving through the narrow streets of Europe and occasionally through the countryside, the atmospheric build of paranoia and distrust explodes into these chases where cars fly through oncoming traffic (no CGI here!) and erupt into balls of flame and into gun battles that would make John Woo and Ringo Lam nod their heads in approval. The film is not necessarily a full out action film, as spectacle is limited to a more personalized and intimate setting, but it certainly hits moments of pure adrenaline packed action that are worthy of it fringing on the genre despite its foundation as an espionage heist flick. It’s impressive to say the least.

So perhaps, with all of this in mind, it’s not so far-fetched that Arrow Video would release a film like Ronin. As a genre film blending espionage, Agatha Christie inspired character interactions, heist pacing, and explosive action, Ronin navigates the pitfalls with almost ballet inspired grace and only falters a bit on its more ambitious subplots. The release of the film is worthy for the film too with its new 4K restoration and tons of behind the scenes featurettes, interviews, and appreciations. Not to mention that alternate ending I previous mentioned and a great piece of writing that digs deep into film. Fans of Ronin will definitely want to bring this edition into their collection and for those who haven’t see it, here’s to hoping that this is the kick off to a new streak of appreciation for this often overlooked thrilling modern classic. 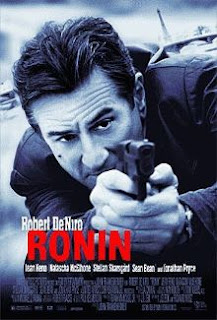