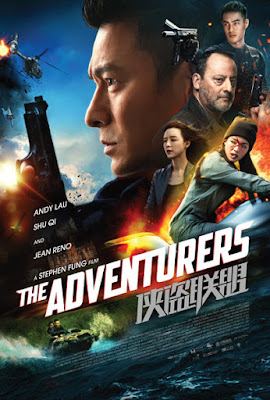 With the popularity of heist films still a thing, it’s not all that shocking that the Chinese film market would want to get in on it too as the Hollywood market seems to be doing quite well over there with the style. Marvel is doing it with their Ant-Man films, the Mission: Impossible series continues to draw in crowds, and the world-wide phenomenon that The Fast and the Furious franchise has become with its globetrotting action heist adventures only seems to generate more revenue as it goes. Thusly, we get a more Mission: Impossible inspired version of Once a Thief in The Adventurers, which sports Stephen Fung in multiple facets behind the camera along with a massively impressive cast to go with it including the critically acclaimed and box office draws of both The Everlasting Andy Lau and Shu Qi in tow. Like many of the western films mentioned above, The Adventurers sets its sights on big screen suave with its international settings, cast, and adventure that’s mostly carried by the sheer charisma of its cast. It’s not a film that will have critics swooning for a new franchise, but it’s a film that earns its merits by being fun and exciting in its execution if nothing else. The Adventurers sets out for high stakes international adventure and finds a massively entertaining film in the process.

Zhang (Andy Lau) has just been released from prison in France after five years. He’s one of the world’s greatest thieves and it doesn’t take long for him to get back into the game with his partner (Tony Yang) and new recruit Red (Shu Qi). Their aim? To steal the last few pieces of the Gaia necklace for their boss Kong (Eric Tsang) before a persistent French cop (Jean Reno) catches up to them.

Firstly, let’s make things clear that this The Adventurers has nothing to do with another Andy Lau starring film of the same name directed by Ringo Lam in the mid-90s. Also, despite what initial reports said about this film being another remake of John Woo’s Once a Thief, it’s about as loosely tied to that as one can get if a person squints hard enough to try and see the connections. As mentioned above, The Adventurers has more in common with the modern Mission: Impossible films or Fast & Furious movies than it does those Hong Kong flicks so when going into it just make sure you keep that in mind. This film is meant to be a high flying, charming super thief flick and that intent remains very focused from the opening through the final credits.

That being said, The Adventurers does come off ultimately as a mixed bag as some major flaws become apparent throughout the film. In its intent to be big and bold with its heists and outlandish with its gimmicks, it does occasionally forget that it needs to be grounded to something to make sure the audience hangs with it as it starts throwing in mechanical spiders, gliding suits, and 4-wheelers that convert into jet skis. What starts off like most late 80s and early 90s Hong Kong flicks by having our charming and flawed anti-hero protagonist get released from prison, very quickly shows its real colors by having him whisked away by a damn helicopter out of the middle of nowhere to whiplash the audience into the first heist of the film. This isn’t really all that surprising considering that the Chinese film market desperately wants to make Andy Lau their version of James Bond or Ethan Hunt (which failed horrifically in the film Switch) and from there the film takes that route into being an entertainment first, everything else second kind of film. It never spends a lot of time developing our main characters, outside of some thinly threaded “we have to find the guy that set me up” motivations and an ex-finance spin for Andy Lau’s Zhang, and it tends to spend more time developing the rogue French cop for what seems more like good intent than a truly impactful twist on the usual heist narrative. Granted, at an hour and forty-five minutes with credits, the film is jammed with a lot of stuff and trying to pull back to give backstories does seem like it would have been padding, but even spending more time developing the chemistry between our three thieves would have been nice. Most of that comes in smaller pieces with some fun chemistry at the very end.

Yet, The Adventurers has such a talented cast of screen devouring personalities that, despite some major flaws in the script and narrative (there is a ridiculous twist in the third act that had me in a fit of unintentional laughter, truthfully), the film remains inherently charming and fun. The focus of the film was never meant to create a thoughtful set of characters to wrap a heist story around, but it was meant to have a series of outrageous heists and action set pieces they needed fun characters for and that’s what The Adventurers does. The execution of these heist pieces is impressively accomplished. Stephen Fung, known in the US for being one of the minds behind AMC’s The Badlands with Daniel Wu, sets up the tone, pacing, and tension for these sequences for maximum effect. The gimmicks work in that cheesy Mission: Impossible manner, reveals are delightfully fun and outlandish, and the James Bond-esque high class espionage tid bits seemingly fit right in with the rest. It’s not often that one sees a world class actor like Andy Lau sky dive onto a dock by a light house, take a motorcycle to a gala, sneak in, and steal a woman’s necklace, but The Adventurers aims for that kind of attitude and it delivers. Even the secondary cast seems game for the kind of entertainment on hand as both Jean Reno and Eric Tsang deliver fun stereotypes of the usual secondary character fodder. In this manner, it’s hard not to have a huge smile on your face for the entire time watch The Adventurers.

In the end, yes, The Adventurers does have a problematic script and its focus on its wink-wink, ultra serious attitude can be perplexing for those looking for something a bit deeper. Sub-plots seem to be there for story progression purposes and context for much of its twists is fleeting. Yet, the almost two hour run time seemingly flew by. This film is delightfully fun and outlandish in how it goes about setting up its heist sequences and the sheer charming nature and screen presence of its cast make for a highly enjoyable popcorn flick. The Adventurers is out for cinematic adventure and delivers that in spades. Go in with the right mindset and enjoy it for what it is as a late summer flick.

Here’s to hoping that The Adventurers does become a franchise. It sets up a lot of the foundations for a great series of films and I’d be ready to strap in for another one much sooner rather than later.