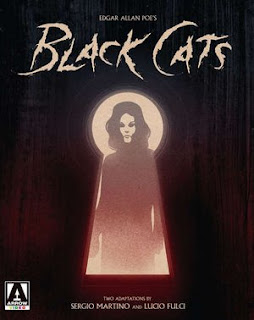 Giallo is far from my favorite genre overall and it’s usually one that I rarely review here at Blood Brothers, but when Arrow Video’s latest release of Sergio Martino’s Your Vice Is a Locked Room and Only I Have the Key (which will be known as Your Vice from this point on for the sake of hand fatigue) landed on my doorstep it was hard not to get a bit excited. Your Vice contains some of the work of many of the iconic names of giallo cinema to it and yet, I had only heard of mixed things about the loose adaption of Edgar Allan Poe’s Black Cat story. In the end, Your Vice is the mixed bag that many fans claimed it to be, but it’s hardly the film that some called disappointing. Particularly when the third act comes out so strongly that it delivers a purpose to the rather plodding first two-thirds that viewers may not see coming.

Their marriage is crumbling. Irina (Strindberg) can’t stand her abusive and alcoholic husband Oliverio (Pistilli) and his almost animalistic sexual tendencies and Oliverio thinks his wife simply holds him back from being the great author he believes he is. When one of local book seller girls is found viciously murdered, Oliverio becomes the prime suspect and things get even more complicated when his beautiful niece (Fenech) shows up to add further stress to the situation…but things are not always what they seem and everyone is a suspect when it comes to this ticking time bomb.

Generally speaking, Your Vice is a relatively ‘safe’ giallo flick. As the genre expanded in popularity, the films became much more ridiculous in their twists, kills, and gimmicks, but for Your Vice the style is played fairly up front focusing on atmosphere and a sense of disillusionment for the characters (and thus, the audience). Iconic Italian director Sergio Martino slathers the film in a dense and disturbed sense of upcoming dread by having each (and damn near EVERY) character become a possible villain and/or victim. Not a single person is all that likable in this film outside of a few very small secondary characters, which can be an issue for an audience who really wants to root for a clear cut protagonist, and the various lead roles slither in and out of varying degrees of confusion and corruption as the film plays on. This allows the various actors to really dig into the subtleties of their roles, although a big tip of the hat goes to Fenech in the role of the niece who comes off as deliciously dislikable with her charm, and it allows director Martino to build in some serious levels of gray color in what should have been a very black and white murder mystery flick.

However, the film does take a long time to really start maneuvering the various pieces of the plotting into place for the audience and it makes the first two-thirds of the film drag quite a bit. The sexual tone of the film and the subtle inclusion of the ‘black cat’ aspect of its script source tend to keep things a bit more interesting overall in style, but the film seems very particular with its plotting that it can seem almost too intentional at times. Stick with the film though because Your Vice saves what might have been a very mediocre giallo with a stupendous third act.

When the killer is addressed by the end of the second act (!), one starts to wonder what Your Vice has up its sleeve…and it’s a lot. Not that I’m going to be a dick and give away the plethora of various plot twists and characters shifts that make the third act so good, but just know that the body count skyrockets and the twists that come rushing in make all of the various intentional plotting, including the rather mundane use of the cat, come back full circle to be effective and often shocking. There is one character with silver hair that shows up at this point that is not nearly built enough to be as effective as one would hope, but really it’s nitpicking to one of the better third acts I’ve seen in a giallo before.

While I have never seen a version of this film previous to this Arrow Video release in the double movie set Black Cats (along with Lucio Fulci’s The Black Cat – a review you can read HERE), this release is pretty impressive none-the-less. The 2K restoration of the film is tight as is the option of having both Italian and English language versions of the film (with subtitles for both for those who like those like myself), but there are a handful of interviews worthy of the purchase price – including a rather hilariously dry written interview with screenwriter Gastaldi and a new little brief analysis of why Your Vice is an overlooked gem by horror auteur Eli Roth. Fans of gialli, whether this film is included in the list of best of the genre or not, are going to want to immediately dig into this release for its robust features.

All in all, Your Vice Is a Locked Room and Only I Have the Key is the kind of giallo for collectors. It has a lot of key crew and cast involved in its creation that makes it a rather fun and effective film, despite its rather plodding first two acts and dry and dark approach to the material. It’s not necessarily the most creative of murder mysteries that arose out of the genre, but it’s pretty impeccably executed (and lavishly restored) that giallo fans are going to want to have this one in their collection.