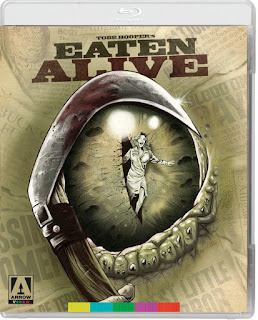 
As a fan of early Tobe Hooper material, I’m somewhat ashamed to admit that I had never taken the dive into his killer bayou flick Eaten Alive. The film has a diehard cult following and it seemed interesting enough from the clips I had seen, but I never really got around to actually watching the film. With Arrow Video’s latest (and dare I say greatest) home release of the film though, it was high time to partake in the flick. Eaten Alive might not be as groundbreaking as Hooper’s tour de force The Texas Chainsaw Massacre and it might not be as outrageously psychedelic and hilarious as The Texas Chainsaw Massacre 2, but the film sits nicely as a strange combination of the two with its fairly off kilter narrative and interesting knack for the oddball style. It’s easy to see why this is a cult favorite with these elements and it gave me a left hook that I was not expecting.

The Starlight Hotel is the perfect place for weary travelers to rest while wandering about the bayou. It’s too bad that it happens to be run by a very strange fellow Judd (Brand) who has uncontrollable emotional spikes that seem to leave his guests in the mouth of his very hungry pet crocodile. When his rage starts to leave a body trail though, he finds himself with some new guests that might uncover his secret…

The expectations going into Eaten Alive were that it would be something of a late 70s slasher, a film that tried to re-capitalized on the growing cult popularity of The Texas Chainsaw Massacre. However, Eaten Alive is not nearly like that. It certainly has all the slasher elements like the gimmicky villain with his scythe and crocodile, gratuitous nudity, unique deaths, and a rotating series of victims, but calling it a slasher certainly undermines some of the oddities of its artistic nature. In many ways, the film is almost more akin to an exploitative version of Psycho than a true slasher. The film has no ‘real’ protagonist that drives the film and instead presents itself as a slice of time between the time the first victim, a young woman looking for shelter after she realizes she doesn’t have what it takes to be a prostitute at the local brothel, and when the villainous Judd’s little world crumbles. In that time, Judd – played with a quirky and utterly fascinating spin by Neville Brand – acts as a sort of focal antagonist for the film. The cast of various “heroes and victims” becomes a rotating roster from there which gives the film a strange structure to it. Even the sheriff, the classic Stuart Whitman, doesn’t show up until roughly half way through the film and doesn’t seemingly do much except give some emotional weight to the various other guests of the hotel.

It’s this merry-go-round style of characters that will obviously rub some horror fans the wrong way. Truthfully, the audience doesn’t have one person to really invest in and root for. The audience roots for all of the people, in one way or another particularly a mother and daughter duo that find themselves trapped in the hotel, but it’s hard to invest in any of the characters fully. In an intriguing spin on the slasher elements, the film tends to play all of the men as unstable and often delirious caricatures. Mel Ferrer pops up in what would seem to be the main protagonist role about half way through the film, but he’s quickly deemed inept due to grief. The same goes again and again for a lot of the characters like the above mentioned sheriff or the sleazy Buck played by genre legend Robert Englund. The female roles however, tend to be stronger and more determined. This choice works well to play off of the craziness of Judd and his reptilian co-killer. It’s a spin on the slasher motif that works in delightful (and thoughtful) ways to add even more layers for the more devout cinephiles to peel back.

Beyond the off center nature of its plotting and the unique character roster, Eaten Alive also works as a sort of theatrical horror film. I say theatrical because there seems to be an intent to make the plot and visuals, particularly in the opening, feel very presentational versus representational. The swamp that the Starlight Hotel rests in is lit in a very bright red wash lighting and the obvious sets and prop crocodile are not hidden by how Hooper shoots the film. He almost owns the film’s low budget and makes it another layer of how the film almost mocks its horror nature. Why the hell would anyone have a scythe in the middle of a bayou? He’s not a farmer and it’s not a useful tool to cut through the foliage. It’s just another piece of how over the top and ridiculously theatrical Eaten Alive wants to be in its horror elements. Even most of the death scenes seem a bit out there. I’m trying to limit the spoilers in this review, but this film somehow pulls off its outrageous moments with enough tension and atmosphere to keep it scary without ever losing its awkward sense of humor. This is Hooper at some of his best.

While there seems to be a slew of mixed feelings about Eaten Alive from fans and critics alike, the odd sense of humor and horror to the film had me sold from minute one and it carried throughout the entire showing of the film. Arrow Video and their brilliantly remastered release of the film showcases it in the best possible way and it’s a film that fully deserves the kind treatment it has been given with this Blu Ray and DVD combo pak. It’s truly a cult horror gem if there ever was one to pick up in the Halloween season. Eaten Alive is truly an innovative and unique horror viewing experience and this release is worthy of the artistic (and tongue in cheek) nature of the film.