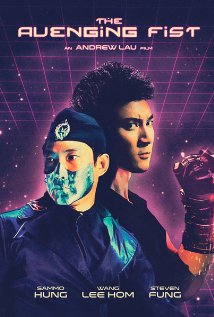 The Avenging Fist is one of those movies that is far more fascinating in its failures then it ever is in its successes. Not that there is a whole lot to praise about this film, but throughout the film I found myself hooked on just what other bat shit insane thing it would throw at me. Considering the talent in front and behind the camera the film is something of a massive train wreck. While the film never seems to find a footing on any of its one thousand genre elements or various themes, it does crash and in burn in such a spectacular fashion that it’s almost praise worthy in its disastrous ways. A film that owns as a discussion piece for Hong Kong cinema fanatics more than anything. So The Avenging Fist has that going for it.

For Meganova (Wang Lee Hom) and his sister, life has been a bit rough for a while. Their family is haunted by the mysterious death of their father Thunder (Yuen Biao) and their rebellious nature is proof of their restless mindset. When Meganova becomes friends with Iron Surfer (Stephen Fung) and forges a romantic relationship his life seems to be heading in the right direction, but appearance off a masked villain and a detective from his past (Sammo Hung) makes things very complicated…and now it may be up to him to stop a military uprising that will slaughter thousands of innocent people.

While the above synopsis seems a bit ridiculous, it’s only the tip of the iceberg with how outrageous The Avenging Fist actually is. If you took a late 90s Hong Kong action film, smothered it in Japanese video game visuals, powered it with science fiction fueled wuxia, and then gave it the CGI of a made for TV movie then that’s what The Avenging Fist consists of. It’s out right fucking insane. The film builds itself on some classic Hong Kong action tropes about a family torn apart and the “chosen son” being the one that must train and find his center to defeat an evil warlord. It just so happens that he’s chosen because he’s a genetic experiment that doesn’t need a “power glove” to tap into the unused 80% of his brain to unleash super powers. I know! It’s hilariously out there. Our hero, played with excruciating dynamics by Wang Lee Hom, then surrounds himself with other teeny-angsty friends to help him on his quest, including a goggle sporting ex-fighter with the name Iron Surfer (!). He must defeat a masked foe to get to an evil army with the guidance of a detective named Dark in the most cliché ways possible. Oh, and something something something romantic subplot that doesn’t work. Truthfully, it’s all clichés and science fiction jibber jabber. With some kind of troll monster that shows up at one point and mind control twists. Let’s be honest, I couldn’t follow the intricacies of the plot. It was just too hilariously bad.

Yet, I’ve seen a 100 terrible Hong Kong action films that still succeed because of the action. Too bad The Avenging Fist can’t even get that right. Between director Andrew Lau, who would just a year after this go on to direct one of the greatest crime films ever Infernal Affairs, and fight directing god Corey Yuen, this film should have been a home run. Yet, it’s slathered in video game movie elements that simply don’t work. The fight work is a weird blend of wuxia powers and blurred/poorly edited movement that never utilizes the world class fighters in the cast. Not to mention, the pacing for a lot of the fights is poorly constructed and placed in the film. So it doesn’t even entertain on that level.

I won’t even go too much into the behind the scenes drama involving the game company Namco. The Avenging Fist was originally supposed to be a live action Tekken film. Not that the character designs don’t obviously rip off the game, but they even put a disclaimer at the end that this film in no way related to the gaming franchise. I’ll let fans of the game try to pick out all of the shit that was obviously pulled from the game and its story. It’s more fun that way.

On its own, The Avenging Fist is a hilariously terrible film. The plot is too overzealous in its formula that it doesn’t try to cover up its basic tropes with good execution or thoughtful action sequences. I came out of the film more confused than I went into it. For those looking for a film that’s Z-grade gold, then I highly suggest checking out The Avenging Fist. If you can’t stand a film that has no foundation or goal, then I suggest a skip. However, I think I will be keeping it in my collection as a nice topic of conversation when it comes to the subject of overlooked trashy gems.