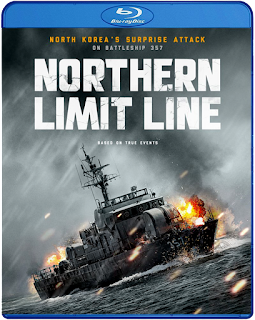 Many of the early reviews for Northern Limit Line spouted off rhetoric about the film being too propaganda-ish with its patriotic South Korean themes. Truthfully though, the film is not even nearly as bad as 80% of the war films that get made in the United States. In fact, Northern Limit Line is quite the serviceable military drama…to a fault. Often enough, it actually plays things relatively safe as it caters to its mainstream audience instead of really digging into its material. Still, this Korean piece of dramatic action has enough heart and enough action to keep the audience hooked throughout its two hour run time even if the film quickly dissolves from memory after the credits roll.

For Korean patrol boat 357, it was supposed to be just another day on patrol. The crew was excited about South Korea’s football match on TV, the various members dealing with their own personal problems like family, and learning the tricks of being at sea. When a few North Korean ships decide to fire on them though, all of that must be pushed aside if they are going to survive the onslaught.

As one of those films that is “based on a true story,” Northern Limit Line takes its time building up some cinematic relationships for its crew. Set to the backdrop of a time when South Korea was high on patriotic pride with the success of their football team, the film utilizes this to its benefit to craft some symbolic and dramatic set pieces. Unfortunately, the moments of a child’s party or a drunken encounter with a disenfranchised wife doesn’t necessarily stand out as all that memorable in the sea of cliché beats that many of the characters go through. The fact that the film spends quite a bit of time with various characters and their own personal arcs deters away from the one relationship that seemed to work much better than the rest – as a matured sailor finds a brotherly bond with a new recruit. That and a shockingly effective ending. The acting is all around solid, although nothing nearly as dynamic as one would hope in this kind of film, but we do care enough about the crew that we feel the pain when shit hits the fan in the third act and the naval battle commences.

Which does bring up the point about the actual “battle” that this film uses as its core conflict. The final act is decently shot (although South Korea is still a bit behind in the use of super realistic CGI) with plenty of horrors and tension to be held as we see our beloved crew come under fire, but even then the film uses a faceless enemy to create this conflict and it doesn’t work nearly as well as it might have. Unlike what some of those other reviews would indicate, it would seem that the film actually pulls away from being too propaganda propelled by not showing the enemy ship as this monstrous evil – although the black color scheme of the ship certainly hints at such as does the gruff looking leader that shows up for one or two scenes – and it actually pulls away from the cinematic aspect of the flick. It tries to make up for it with some solid gore and realistic special effects to show the evil that rains down on the crew, but it lacks the building tension that’s needed in the previous acts to pull it off. I’m not a history expect about this incident, but the final act was well executed for what essentially comes off as a siege on a patrol boat.

All in all, Northern Limit Line is a fine dramatic piece of film with plenty of likeable characters, some interesting relationships, and a well-executed third act of destruction and mayhem. However, it tends to fall into too many cliché war film moments and lacks a building tension for the final act to truly succeed at being in the upper echelon of dramatic war flicks. For those looking for something solid in that genre though, Northern Limit Line works even if it doesn’t quite excel at its dramatic elements.