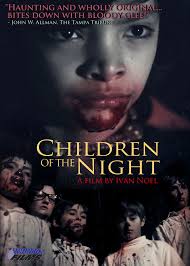 Vampire films are a dime a dozen. They have always been a consistent force in the horror genre, but in the last decade or so they have been the subject of a lot of different genres from teeny romances with Twilight to comedies like What We Do in the Shadows. Children of the Night, a low budget Argentinian film getting a US release through Artsploitation films this year, is a whole lot of genres blended into one film. The low budget hinders a lot of how the experience of this film works, but Children of the Night is a remarkably quirky and refreshing spin on the classic vampire genre. One that will certainly find its cult audience.


Alicia (Ramos) receives a mysterious email from a children’s home that wants her to do some coverage. When she arrives though, she finds that all of the children are afflicted with the same “disease.” They are children left to fend for themselves after being bitten by vampires but not killed. When a vampire hunting cult comes to town though, Alicia will see that these children are not fully defenseless, not when they are protected by the grandson of the father of all vampires.

Artsploitation Films’ dedication to finding some of the best foreign horror and thriller films has paid off this year. With releases for great films like Cub, Der Samurai, Horsehead, and The Treatment, it was almost necessary that they would have a film that didn’t receive damn near perfect praise here. Children of the Night, despite some great ideas and some odd quirks of focus, tends to suffer greatly from its low budget. The film lacks the production values to really sell its ambitious pieces and the look of the film compares to something one might see as a made for TV film. Unfortunately, this lack of budget carries over into some of the other elements too. Some of the secondary performances from the kids can be a bit weak and some of the special effects don’t work nearly as well as one would hope. Even the music tends to be a bit too low key at times. However, understanding the low budget boundaries can make the audience dig in for the good stuff.

In the opening it was mentioned that Children of the Night was a genre bender. While horror is most certainly the overarching foundation of the film with its gore soaked finale and occasionally tension filled moments, the film has a knack for injecting its fair share of dramatic beats and even quirky humor into the mix. The real reason that vampire fans should see it is just how it takes these elements to create its own unique universe that takes classic spins on vampire tropes. It builds its own mythology about vampire caretakers, the vampire hunters, and even the legend of Dracula…and the book’s author. There is a refreshing sense of heart and soul to this film as it portrays the vampires as sympathetic protagonists against a world that simply does not understand. Some of the acting is spot on to help too with particular note for the caretaker who utterly nails her performance in the film. For this reason, with its energetic embrace of the odd script, this film earns a pass for some of its execution problems.

Truthfully, Children of the Night is the kind of film whose ambitions are much larger than its budget could ever allow, but it’s hard not to appreciate some of the intriguing spins and refreshing takes on the lore that the film uses. There are a lot of other vampire movies that might technically be better with similar themes, like Let the Right One In or Byzantium, but for those looking for an independent film with a lot of heart and just enough off kilter humor to win over its audience.