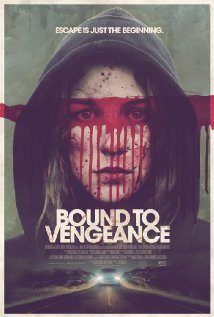 Director: José Manuel Cravioto
Notable Cast: Tina Ivlev, Richard Tyson, Bianca Malinowski
Sometimes all it takes is a great poster to get the audience you want hooked. This was the case for Bound to Vengeance with me. While having a release through IFC Midnight AND Scream Factory certainly helps, it wasn’t until I saw the cover/poster next to this opening paragraph that I decided to partake in the film. It’s fortunate that I did because Bound to Vengeance is a brutal and impressively executed modern grindhouse feature worthy of the time for most cult film fans. It’s a slick, sick, and simplistic ride into the social underbelly of sex trafficking powered by a handful of powerhouse performances and guided by the impeccable visuals of director José Manuel Cravioto. Bound to Vengeance is bound to pack a whollup on most viewers and it’s vicious at doing so.

Eve (Ivlev) has done it. She’s figured out a way to free herself from the hellish dungeon that her kidnapper (Tyson) has kept her in for months. During her escape though, she discovers that she isn’t the only one. There are at least four other girls that he has in various locations around town…and she needs to save them, no matter what the cost.

The narrative for Bound to Vengeance is a fairly simple basis and it’s crafted on themes of redemption, vengeance, and lost humanity that any self-respecting grindhouse fan will instantly recognize and latch onto. However, the ways that this film go about unrolling this narrative are fun and rather impactful. It’s not unusual to see films toy with the time lines of the stories any more. In fact, it’s almost expected in some degree. However, the way that Bound to Vengeance plays juxtaposition is very effective. The film starts off by throwing the audience right into the situation. The opening scene is our villain, played with delightful detail by Richard Tyson, coming to the house to make soup for his captive and her subsequent escape. The film is relatively dark, in theme and visuals, and balanced out by muted neon colors of yellows, greens, blues, and pinks and this plays into stark contrast to bursts of a home video of our lead character Eve and her charming boyfriend Ronnie on a sunny day at the carnival. There are hints littered about the dialogue during these “flashbacks” and in the present time story about the events leading up to her escape, but the film wisely keeps a lot of it saved for punchy plot progressions or in subtle ways for the audience to make the discoveries. It’s this sort of blooming flower of emotional impact that keeps Bound to Vengeance hooked into the audience despite its protagonist slowly slipping further and further into murky emotional voids.

A big part of why this narrative works is the strong execution on screen by all parties involved. Director Cravioto has a knack from crafting a gritty and abrasive atmosphere without necessarily succumbing into too many of the cliché horror elements. Occasionally, the film tends to force some unusual kills into the mix like how the first girl that Eve saves sort of randomly dies, but really Bound to Vengeance keeps things grounded and flowing at an even pace which allows a lot of the intense moments to work. It’s violent and the atmosphere is suffocating at times. It’s also driven by some phenomenal performances. Our protagonist and her beaten captor have tense on screen chemistry compounded by the seething dialogue, and the film knows how to maneuver the modern aspects of its writing with the grindhouse elements of its violent style that the morally gray area of its characters occupy. It’s a great combination that makes the film entertaining and still impactful.

Bound to Vengeance is not perfect, some of the decisions made by the characters can be questionable and some of the kills that show up in the earlier portions seemed a bit forced, but the rest of the film is an impressive mix of modern low budget artistry and classic grindhouse aspects. The visuals are top notch, the atmosphere is spot on, and the pulsating rhythms of the film are broken in shocking ways with the violence and plot shifts. Fans of the undercurrent flows of genre film are going to want to dive into Bound to Vengeance as it comes with a very high recommendation. Who knew that this is the kind of gem I would find just by being sold on such a stunningly cool poster? You can’t judge a film by its poster, but it can help.

Written By Matt Reifschneider
Posted by DarkReif at 9:32 AM