Halloween: The Curse of Michael Myers (1995) 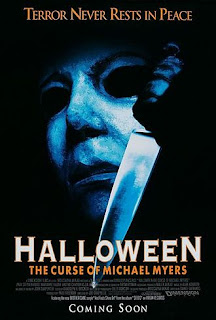 As my Halloween marathon continues this year, it’s come to my attention that my reviews of the various sequels to this franchise do not always align with the viewpoints of its dedicated fan base. The various dozens of messages, emails, and comments about my reviews of the Halloween films have certainly solidified the fact that this franchise has some die-hard fans that are willing to fight and die for the various entries. Unfortunately, when it comes to the sixth entry of the series, Halloween: The Curse of Michael Myers, I don’t know if there is any kind of dedicated fan base that can justify just how odd this film is. The resulting film has been edited into two very different cuts of the film, both of which will be talked about here and neither of which are very good thanks to a horrible production.

Jamie Lloyd (Brandy) has been kept by a secret cult for quite some time now. She’s a young woman, held captive with her baby, with no hope for a future. When she happens to escape though, her child ends up in the hands of a Myers obsessed Tommy Doyle (Rudd) who contacts a young Strode family member (Hagan) and a now semi-sane Dr. Loomis (Pleasence) to help him dig up the cult like conspiracy at the root of the killer’s decades long terror escapade.

To be honest, it’s not that Halloween 5 left a whole lot of room for quality growth for this franchise with its uncooperative elements of symbols and mysterious cowboys out to find Myers. Really, that’s a weird combo to work with going into Halloween 6. Yet, it’s the included elements of this cult that is dedicated to the ‘thorn symbol’ and its mysterious leader that are only the tip of the iceberg at how awkward this film is. The Curse of Michael Myers has a multitude of various subplots all going every which way at once as we are introduced to a ‘new’ Jamie Lloyd (who is randomly pregnant (!) and I won’t even try to justify who the father is) and the cult which kicks off a whole plethora of twists and turns. Depending on which version you watch is how a lot of the elements are tied together though. In the producer’s cut a lot more about Loomis and his connection to the cult is explored, but the finale takes a wickedly unexciting spin with runes that leaves the audience wondering what the hell just happened to the actual slasher aspect of the film. In the theatrical cut, you’re at least given more of a traditional slasher feel, albeit with a terrible heavy metal score instead of the traditional Halloween theme and horror tone of the producer’s cut. Unfortunately, the resulting final act still doesn’t make a lick of fucking sense as they randomly throw in things to try and make the various subplots work. It just doesn’t work. Hey, at least it’s more exciting than the producer’s cut ending so it has that going for it.


Both cuts of the film focus on the return of Tommy Doyle, the kid that Laurie Strode babysat in the first film, as a sort of Myers expert. Unfortunately, Tommy is a terrible protagonist and he’s portrayed with the screen presence of a tree trunk by a very young Paul Rudd. His strange focus on the occult, the odd time he has hauling a baby around, and his non-existent chemistry with new “final Strode girl” is about as awkward as the rest of the film. The only thing that makes it even stranger is that in the final act of the producer’s cut of the film, he actually attempts to defeat Myers using some runes inscribed on rocks…and it comes off as unintentionally hilarious. Hell, the new Strode lady and Loomis would have made for better main protagonists, but even they aren’t given a lot to go on in this film as it slowly slips into slasher mediocrity through the second act and into complete outrageousness in the third.

So if the story and the characters don’t really work, what does work? Well, Halloween 6 is not a completely lost cause. There are some great throwback elements to previous entries that are fun like some characters that are brought back (another doctor that Loomis worked with previously) and the film scores a few fun visuals as it tries to jam in all of the random plot progressions. The theatrical cut has some nice gore effects for the horror fans out there and the producer’s cut retains a bit more of that classic horror tone to keep some of the chase bits tense and exciting, thanks to the use of John Carpenter’s theme instead of the shrieking heavy metal guitars. There are pieces here and there that might have worked if the whole they were nestled in was a better product. Alas, there just isn’t a lot to work with and the good things fall flat in the long run.

To be honest, while the producer’s cut of Halloween 6 has a better tone with its score and explains a lot of the various (and irritating) plot holes, neither cut of the film is a good film. Both have some very huge issues in its narrative and the problems of a protagonist along with the idiotic endings make both cuts a bit hard to endure. Half of the slasher elements rarely make sense and the Cult of Thorn elements are shoehorned in whether or not they fit. It’s obvious that this is a forced evolution for the franchise that doesn’t work no matter how you score, edit, and re-film it. Halloween: The Curse of Michael Myers is simply not a film that works within or outside of the iconic slasher franchise.

If there is anything I will give this film credit for, it’s that it is far more fascinating (and often hilarious) in its failures then it might have ever been as a success. So there is that. Just reading about the “cursed” production of this film is actually more entertaining than the movie.