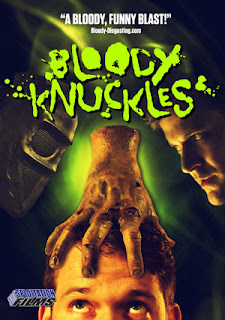 While it might seem unusual to the average person, I was pretty excited to watch Bloody Knuckles. The concept of a severed hand taking revenge for its lost body, mixed with offensive elements and plenty of gore, sparked an interest in me. Perhaps it’s my odd love for the massively overlooked horror comedy Idle Hands or the odd blend of horror, comedy, offensiveness, and revenge flick that Bloody Knuckles promised, but I was pretty stoked to be throwing in the Blu Ray when it arrived on my doorstep. It just might be these expectations of cult horror comedy gold that left me a bit underwhelmed overall by the film. It certainly has its moments and for the casual horror fan it might find some of it as offensive, but Bloody Knuckles didn’t quite execute the outrageous promises that it seemed to have potential for. Fun, sure, but not nearly as effective with the mix as one would hope.

Travis (Boys) is an up and coming comic book writer and artist who plies his trade by writing super offensive indie comics and it has attracted the attention of an upcoming journalist (Giraud). With his latest issue though, he has also attracts the attention of a questionable business man Mr. Fong (Mazak.) It’s this businessman and his gangsters that cut off Travis’ hand as a warning for his comics and his offensive writing. Dismemberment has never kept a bad hand dead though and it’s not long before it comes back…for revenge.

On the surface, Bloody Knuckles is – essentially – a poor man’s combination of the silliness (and melting faces) of Troma with the elements of story that most horror comedies use that includes a romantic subplot, a man who loses his sight on where he wants to go in life, and the various odd situations that arise from his quest. However, it never quite grasps the blend of humor, horror, and character growth that other horror comedies have mashed together this year. Occasionally it works, there is a few fun bits with our “hero” and his best friend and there is some decently funny material when his severed hand finally shows up, but it’s not nearly as effectively funny as one would hope with its Evil Dead 2 meets Troma concept. Some of the gore is fun, particularly the effects of a poison on people and some of the hand work with the severed hand, but it’s rarely something that comes off as fresh or original as it could have.

Oddly enough, the film isn’t nearly as offensive as it seemed it was going to be. It starts off in some offensive manners as a mentally handicapped person drinks some poison and then subsequently melts, but it even goes as far as being too serious at times. Instead of spending so much time laying out the various pros and cons of what ‘offensive’ humor is good and bad for, they might have gone with just running with the idea. Our hero and his journalist girl pal are about as basic as they get when it comes to likeably protagonists and our lead’s offensive humor is rarely offensive to the audience as much as it is towards other characters, and outside of some great secondary characters like a vengeance driven S&M costumed man which turns up for some great laughs in the second half, the film tends to downplay some of its more outrageous elements. The villain is evil, but not nearly evil enough, and even the henchmen could have been played up to insane levels if they wanted. Bloody Knuckles simply doesn’t play those cards.

As far as horror comedies go, Bloody Knuckles isn’t nearly as bad or as good as it could have been. It tends to play things a bit safe after the opening sequence with its characters and plotting and doesn’t utilize the horror or the comedy to the offensive ways it could have. It is still a fairly funny movie in its own right and with the right expectations then viewers ought to find quite a bit of enjoyment out of it. In a year of so many great horror comedies though, this one feels like it’s a missed opportunity. It will find its cult fan base, but beyond that Bloody Knuckles is just mediocre.