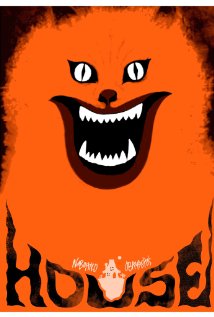 When it comes to films that inspire insanity, one has to look no further than Japan. At times it’s mostly outrageous entertainment vomit on screen, as in the case of most of the splatter films, but occasionally there is an inspired artistry to their genre bending and odd approaches like the anti-musical musical The Happiness of the Katakuris that I reviewed earlier this year. This sort of motivated and thoughtful lunacy is where the 1977 film House lies. An often awkward intermingling of comedy, horror, and fantasy, House – also known as Hausu, is a film that deserves a massive “WTF” from its audience, but it’s also very obvious that this was the intent of the film. Thus, it accomplishes what it sets out to do in spades. Gloriously, might I add.

When Gorgeous (Kimiko Ikegami) finds out her powerful father is due to wed a new wife, she feels her mother and her mother’s family is somewhat betrayed. She reaches out to her long, lost aunt and asks if she can stay at her mansion in the countryside to reconnect…albeit she will be bringing her six best friends along. The answer is yes and off they go. Unfortunately, despite the warm appearance of her aunt and his massive house, something seems amiss when they arrive and when some of the girls begin to disappear they strive to stay alive.

The basis of House is your average haunted house flick. Unique setting, pissed off spirit, group of young people primed for slaughter, and gimmicks galore for kills and scares. In a way, House is very formulaic. The audience can essentially plot out this film fairly early on and if you’re a horror fan, you can probably already guess the various “twists” and “surprises” that are going to greet you throughout. However, director Nobuhiko Ôbayashi and his writers litter the film with all kinds of crazy ass characters and moments to keep things…unique. Our heroines are all named for their gimmicky character attributes. Kung Fu is the strong and physical one. Fantasy is the dreamer. Gorgeous is the beautiful and vain one. Mac is the hungry one. So take a guess at how most of them perish…yet, it’s altogether refreshing at how House plays into its formulaic approach in an almost mocking manner. It plays it up to an almost comedic effect (more on that in a minute) and scenes that one would find horrifying are dealt with in some unusual ways. There is a scene where one of the girls goes to get a glass of water and the water that pours into the glass turns to blood. Yet, instead of playing up the “Oh my God, what is this?” moment for the character, she never even notices and the film moves on. It’s rather inspired that this is how the film treats itself, allowing the tone shifts and awkwardness of some of the directorial choices to resonate in its very theatrical visuals and themes.

The humor, however, may not be for everyone. There is a lot of different humor on display here with bits of slapstick, courtesy of their teacher who has to go to the hospital after falling on a bucket in what seems to be stop motion, and there is a ton of visual gags to be had with the painted sets and odd set ups. When Gorgeous tells the story of her aunt’s past to her friends, the visuals shift to that of a silent film on display – and then the girls comment over it like they are watching it along with you remarking about how handsome characters are or noting the narrative itself. It’s as if the film has no regards to breaking its own conventions time and time again for the benefit of creating a world that flows like a theatrical stream of conscious completely aware of itself and the audience. Just the odd editing and animation pieces that appear would be a huge indicator of this. If you can’t stand a film that understands its formula and plays it for gags, then House is going to drive you insane.

It has to be noted though that, despite some dated special effects and some subplots that seemingly go nowhere (which still might be their intent – it’s hard to know in a film like this), House is intentionally and impressively executed. The humor is awkwardly off beat, the visuals are layers of outrageousness, and the self-aware approach to the horror formula is offensively refreshing. It is definitely not a film for everyone, just its theatrical presentation is enough to make some cinephiles cringe, but I found it to be spectacularly odd. It’s almost the anti-horror horror film and I loved it as the unique fingerprint it is. House is bound to be one of the most unique and perplexing viewings of my life as a film observer.

Bonus praise: I’m not sure if I’ve ever seen a movie where someone is devoured by a piano. Even if it did, I’m not sure it would be nearly as bonkers as that scene.