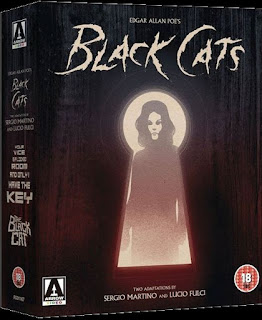 By 1981, Lucio Fulci was riding high on a streak of hits like Zombi and City of the Living Dead– Italian films full of gore, horrors, and his iconic stylish visuals. In the middle of what many might call his golden era of filmmaking, Fulci did end up making The Black Cat, a film inspired by the story of Edgar Allen Poe and one that would go on to be something of an overlooked gem of atmosphere and odd narrative for many fans. Truthfully The Black Cat is hardly as good as Zombi or The Beyond that would come right afterwards, but that doesn’t mean the film isn’t without some awesome material that is finally getting the proper release that Fulci fans have been asking for from Arrow Video.

For a young photographer (Farmer), a series of mysterious murders and disappearances in a small village have kept her attention. Perhaps it’s the strange old man (Magee) on the outskirts of town who supposedly speaks to the dead or the visiting Inspector (Warbeck) who seems intent on solving the seemingly ‘accidental’ deaths that keep her there…or perhaps it’s strange cat that seemingly appears wherever there is to be a death that keeps her around. Either way, the body count is rising and the mystery only deepens.

Despite some of the bad rap that The Black Cat receives as one of Fulci’s weaker films, the film is not nearly as bad as some would imagine it. There are elements that seem a bit out of place (more on that in a minute) and overall the film doesn’t quite feel like it fully grasps its own awesome concept, but it’s still a relatively fun and atmospheric experience for Fulci fans or those looking for a movie more about atmosphere than gore or big scares. It retains a lot of the same feeling as other films around this era from the iconic director with plenty of extreme eye zooms and a dedicated silence around carefully cut dialogue that builds on the sense of tension and dread, a move that only adds to the Poe like tone of the film. The music is scored expertly, in particular the theme for the cat is one that is likely to stick with the viewer long after the film is done, and Magee’s performance as the hate filled Miles is worthy of note as he can subtlety weave in notes of distress, fear, anger, sadness, and apathy into his screen devouring performance. In many ways, The Black Cat is a massively overlooked gem.

However, the issues that arise in The Black Cat are very visible and very uneven. There are entire sequences that don’t feel like they belong in the film, including a scene where Magee tries to kill the titular cat and a sort of spiritual quake occurs in the bedroom of our main female protagonist that feels like it’s purely there are as a knock off of moment from The Exorcist, and there are themes about hypnotism that never really seem to make their way back into the plot by the end. It also doesn’t help that outside of the old man Miles, many of the other characters don’t get nearly enough character arc to work as well as they could have. Our photographer and the Inspector both find themselves, as actors, doing a lot with relatively nothing for them to work with and their potential romantic subplot seems shoveled in for the sake of giving them something to do rather than something that naturally works.

Despite these decently sized flaws, The Black Cat remains one of those Italian films that’s carried on the atmosphere and visual presence of the film more so than its script or strong on screen performances. It feels like an iconic director of the genre attempting something new and it has its ups and downs. Going through the plethora of bonus features on Arrow Video’s packed release helps one understand some of the flaws of the film and the new 2K restoration by the company for this release is certain to have Lucio Fulci fans eager to pick it up – love it or hate it. The film still gets a healthy (and bloody) recommendation from us, particularly this version of the film, as a film that works through a lot of its flaws to retain a lot of great aspects of atmosphere.