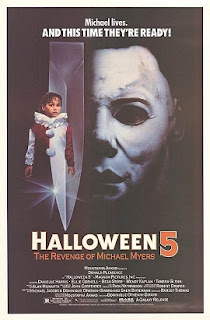 After the producers successfully resurrected Michael Myers for his return in Halloween 4, a film that still has an odd cult following today, it didn’t take them long to scramble up another sequel to capitalize on the re-surging success of the series…and the speedy turnaround shows with Halloween 5: The Revenge of Michael Myers. There still seems to be somewhat of a cult audience that follows this entry, which seems to be beyond my understanding, because outside of a few moments it’s hard to recommend this entry to anyone but the slasher addicted horror fan. Especially when the film takes some random turns that really don’t benefit the whole and baffles the audience.

Jamie Lloyd (Harris) is now being treated at a psychiatric ward after she brutally killed one of her guardians after her encounter with Michael Myers. Dr. Loomis (Pleasence) carefully looks after her as her “sister” Rachel (Cornell) and her friends keep an eye on her recovery. However, Jamie now has a psychic connection to her uncle Myers and she can see what he sees. As the body count rises, Loomis plans to use this to finally trap Michael…and kill him again…once and for all.

As the slasher formula wears thin, the various new film and franchises in the genre started to try and reinvigorate the system by having really dumb twists. For example, having a psychic girl take on your “pure evil” killer. Just one year previous to Halloween 5, the Friday the 13th franchise used this same concept for their seventh entry and it worked to some silly, but entertaining results. Halloween 5 doesn’t fare nearly as well. In many ways, this fifth entry into the slasher franchise suffers from the same issues as the fourth one – namely a piss poor script with piss poor characters. The idea is fun, Jamie being able to see through the eyes of a killer could have added a lot to the parallel elements that were hinted at in the previous entry, but the film never capitalizes on it and it sort of meanders its way into being another generic and unmemorable slasher.


It doesn’t help that this film tries to use multiple protagonists to drive the narrative of the film. While Loomis and Jamie kick off the film (and ultimately end as the main protagonists hell bent on stopping the evil force of Myers), the film has no idea what to do with most of the second act as the character Rachel and her friends begin to drive the film around in classic teens vs killer fashion. Unfortunately, none of the characters – outside of how hilariously insane Loomis seems to be in this film – are worth the time spent with them and you start rooting to see just how violently they will die instead of caring about their plight. It makes for a film that has no residual effect on the viewer and just feeds into the slasher film groupies instead of capitalizing on the aspects that were built up in Halloween 4 with Jamie and Loomis.

As a horror film, Halloween 5 tends to disappoint too. The kills are generic and there is no tension or suspense to be found in most of the film. There is one point where Jamie is caught in an air duct that works surprisingly well in a suspenseful manner, but just previous to that Michael Myers tries to run someone over with a car and there is even a scene where they attempt to capture Myers with a chain net. So it almost negates anything great that there could have been with silly plot progressions and lacking creativity to the scares and kills. There are a few new elements to add to some mystery, like a symbol tattooed on Myers and a mysterious cowboy that shows up a handful of times, but it’s not nearly enough to make any of the film interesting. It just sort of exists to end some of the story lines kicked off by the fourth entry and add a few new ones that it doesn’t tie up (that will be tied up in the sixth entry...sort of).

For a franchise that still exists as one of the most popular slasher series in the world, the downward spiral of quality for this series is rather disappointing. Still, there seems to be a cult fan base even for this entry and it wouldn’t shock me if I received a few hate mails over my distaste for this film and its dumb plotting, poorly executed slasher elements, and awkward narrative structure. However, The Revenge of Michael Myers remains a poor sequel in this series even if it might be fun in a B-grade 'what the hell are they doing' manner.