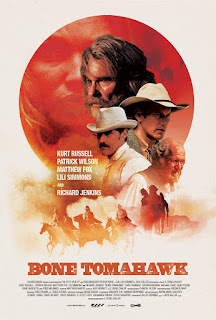 Sometimes (more often than not) the best way to experience a film, especially when you have a good, gut feeling about it, is to go in with little to no knowledge of the film whatsoever. If you see or read about something that makes you say "I think I really wanna see this", then look no further, and seek it out, unless you are the type who can't really do that or don't want to, then buy all means, spoil the ride. That said, this is exactly the way I've experienced the biggest cinematic surprise of 2015 for me, Bone Tomahawk.

After quite the graphic opening, the movie kicks off when an older gentleman named Chicory (the always lovely Richard Jenkins) storms into the office of Sheriff Franklin Hunt (Kurt Russel) scared out of his mind about a stranger just on the outskirts of their lovely little town of Bright Hope (I think, it was something like that). Concerned, but not enough to put down his corn chowder, Hunt and Chicory finish their grub and head out to the bar where the straggler is enjoying some whiskey. I will spoil nothing outside of the set-up. Quite a few things go down and a local cowboy (Patrick Wilson)'s wife (Lili Simmons) ends up being abducted. I really don't want to spoil this film for those who don't know anything going in as I did (though I personally only read reviews post seeing a film). The corn chowder may have revealed too much already. 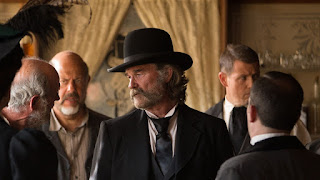 Joking aside, I want to get one thing out in the open very quickly about this particular movie, and that is to say it is not for the squeamish. I mean that in the most serious manner possible. I know it doesn't bother some, and I'm one, but, this is a highly graphic film. Lots of gore and blood is spilled in it's long, but rewarding runtime of 132 minutes. Granted, the movie is slow, and the bloodshed doesn't go non-stop, but when it happens, you know it. The ending has one of the most disgusting images I've seen in a movie, ever. I yelled out loud because my brain couldn't quite process what I was seeing. I want to note that the film uses only prosthetic style blood and gore effects. I can't recall seeing cgi created blood, anywhere, and that was wonderful and brought a great level of realism to this dark, crimson-stained tale.


There really isn't much in the way of plot, and the film doesn't really suffer from it. The movie moves a long at a slow pace, with bursts of surprise moments to keep the stakes high, which it does quite well. In terms of the acting, every one does a great job, with Jenkins' Chicory character being my favorite. There is a bit of humor to the film, though it is never laugh out loud funny, but primarily little character quirks and dialogues between the 4 characters out to find Wilson's wife. A thing I really don't talk about often (since I review foreign films and I believe the subtitles are never completely spot-on) is dialogue. This film has great dialogue. Though there are a great amount beats throughout where no one is speaking, when the 4 are setting up camp for the night, or just trotting along via their horses, there is great dynamics and bantering between all of them. The lines never felt hokey or forced, and really feels like how people would've spoke during the era the film took place in, and it all felt natural and not really theatrical, which is my problem with a lot of westerns.

The cinematography is nice, and suits the film well, but I don't think it is the strongest point, though there is really nothing wrong with it. Bringing up the violent moments again, which is the stand out piece(s) of the film. I think the brutality displayed on-screen is what helps this film stick out from the rest. There aren't shootouts and bullet ballets on horseback, but bursts of man fighting for his life, and it always happens within seconds. Never drawn out, nor does it ever feel choreographed, and this style truly suits it.

I hate when I speak of a film which I don't really speak about. I just wholeheartedly recommend going into this one knowing as little as possible. It's dark, it's gritty, and at times, disgusting and disturbing, but it crafts a journey you soon won't forget. Though it may be a western, I think this is a safe one to recommend to horror fans, as it had a great horror survival feel to it. There is definitely plenty in there to love and I can't really think about anything that really disappointed me from the experience. It drags a bit in the middle, but is all well worth it in the end. I can't praise it enough.