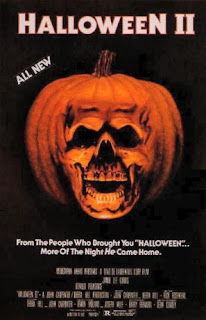 “You don’t know what death is.”

How do you even try to follow up the original Halloween? You know they were going to try with the significant success that the atmospheric slasher had with its audiences, but without John Carpenter in the directorial chair you know it’s not going to quite match. By the time 1981 rolled around though and Halloween II saw its release, the slasher craze that was ignited by the popularity of the first film was booming very quickly. Just the year prior, Friday the 13th decimated the sinners and camp counselors of Crystal Lake with more violence and more gimmicks, so it only seemed natural that Halloween II would actually attempt to up the ante. The results are a bit more mixed than one could hope for, but in the grand scheme of things it’s actually still a pretty effective slasher with enough solid elements to make it a fun and scary romp. No matter how many rumors and issues arose behind the scenes of the film.

Laurie (Curtis) has just been saved by Dr. Loomis (Pleasence), but Michael Myers is nowhere to be found. Loomis continues the good hunt for the psychotic and determined “boogeyman” while Laurie gets a ride to the local hospital for evaluation. Myers isn’t stopping though and now he seems fixated more than ever on finding Laurie – which leads to a vicious game of cat and mouse that Haddonfield will never forget.

To be honest and frank, Halloween II could have been a hell of a lot worse. Truthfully, it could have been Rob Zombie’s Halloween II. (Ba da cha!) Seriously though, the film was obviously made to cash on an uprising trend of slasher films and the first film ended quite nicely – mysterious, but well wrapped up considering its themes and simplicity. However, Halloween II continues on with ‘the night that he came home.’ It’s obvious that director Rick Rosenthal wanted to at least bring in some of the elements that worked in the first film – as the film uses a POV shot of Michael in the first act and continues to utilize the isolation of Laurie with the sort of manic attempts at stopping evil by Dr. Loomis – but this film doesn’t quite capture the same atmosphere as the first one. In a way, we should be thankful. When the film does go for the atmospheric touches, it can’t match its predecessor and tends to show too much of our villainous slasher killer on screen and lacks the creative juices to make the low budget work. This film doesn’t fully try to recreate Halloween as much as add on to it by increasing the violence and increasing the body count. It’s not as good, but it doesn’t fail by being a full carbon copy either.


Halloween II works much better as a full on horror flick with less suspense and more intensity. The film loses a bit of momentum by trying to add in a few new protagonists (a young man in the hospital who seems to really care for Laurie finds himself with very little character arc despite being one of the more substantial secondary pieces) and the film attempts to add a bit of mythology to the Michael Myers character by having him relentlessly stalk Laurie for a specific reason - I won’t spoil it for those who don’t know – and adding just a hint of a supernatural lean. It works, but it’s certainly not perfect. As a slasher though, Halloween II adds more violence and more elements that the teenage horror audience of the time wanted. Some of the kills are brutal in a low key way and despite some strangely illogical leaps (at this point it would seem Michael Myers is actually bulletproof including not dying after being shot twice in the head) the scares and kills work. This film is more of a crowd pleaser than a truly effective horror flick.

Halloween II is far from perfect in its script and some of the rumored issues behind the scenes show up in the tone shifts of the film, but the film is still a highly enjoyable and fun slasher flick worthy as a follow up to the original for taking the series in some new directions. Included in the Halloween box set from Scream Factory, there is also the TV cut to Halloween II which makes some interesting edits and changes to the film which are fun to watch for fans. So keep that in mind.