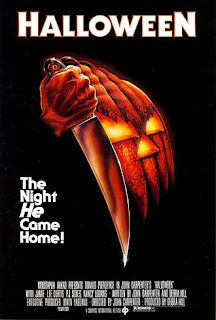 The hardest aspect of going back to review a classic such as Halloween is that most things and elements have been explored in writings previously. Most people have seen it and if they haven’t, they’ve heard of it. It makes writing a review at this point something of a difficult task and one that more or less seems like beating a dead horse. However, this Halloween I have dedicated myself to reviewing this entire franchise and that means starting where it all started…with the 1978 slasher classic Halloween. While the film is not perfect (is it blasphemous to say that?) it is however a film steeped in strong and very simplistic aspects that raise it above the low budget slasher it is. This is why Halloween is iconic.

Laurie (Curtis) has a pretty nice life. She goes to school, she has good friends, and her job as a babysitter provides enough funds for her to live comfortably. However, this Halloween Laurie is going to have her hands full. Michael Myers has just escaped while on his way to a court hearing and he’s on his way home. Unless the intense Dr. Loomis (Pleasence) can stop him, Laurie is going to be right in the path of a maniac.
Coming off of the cult success of Assault on Precinct 13, John Carpenter was on a roll. While the idea of a babysitter killer flick isn’t all that enticing at its basic foundations, he handles the vagueness and atmosphere of Halloween so impressively that it’s hard to be too critical of just how little there is to this movie. Younger viewers may not see the film in the same way that older viewers do as Halloween really set up a lot of the standard techniques, scares, and style that thousands of films would attempt to replicate (or outright copy) in the decades to come. However, in the late 70s the slasher craze was just blooming and Halloween is ahead of the curve.


As was mentioned, Halloween is a remarkably vague film at its core. The audience is fed just enough information to whet their appetite about what is happening and the plotting is very simple. Many fans and people tend to pull information from later films and insert those elements into this film as explanation, but really this film is a very simple story and its narrative is even more basic. At times this can be a bit frustrating for older fans who want “more” from a film or explanations for little things, but Carpenter and company sell this movie so well with its atmosphere, visuals, and performances that it doesn’t matter nearly as much as it should. In a way, it makes the film feel even more like a real day in the shoes of these characters. Partnered with some heartfelt performances from Jamie Lee Curtis and the frantic presence of Donald Pleasence and the film earns its genuine feelings.

The vague elements also make it far scarier with its basic jumps and creepy moments. It supports the final moments of why Loomis seems to believe that The Shape (aka Michael Myers) is pure evil. He doesn’t need a reason or motive to do what he wants. John Carpenter also earns some huge credit for his long shots and stunningly solid use of lighting in the film to sell it. Everyone tends to remember the opening shot with a POV, but really most of the second and third acts are just as well timed and shot than that is. Michael Myers is kept in shadows for a good portion of the film (there is an awesomely shot kill sequence where he is kept hidden by foggy windows of a car for example) and it works to really make him feel like a boogeyman versus just an insane killer.

Outside of a few smaller details, much of which were products of a low budget and a super-fast shooting schedules, Halloween truly is the classic it is made out to be. Carpenter with his cast and crew take a very simple idea and they build something atmospheric and truly scary on top of it. While the rest of the franchise would never reach the heights of execution and thoughtful delivery that this one does, any true horror fan should see this film and appreciate it for its astounding effect.