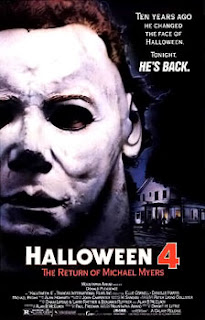 After Halloween III pissed everyone off with its lack of Michael Myers, it seemed like an easy fix to bring Michael Myers back for the fourth one and call it Halloween 4: The Return of Michael Myers just so all of the fans would know that he was coming back. So the producers and director slapped together a story about Michael Myers escaping while being transported to another psychiatric hospital and heading back to Haddonfield to kill his niece…since Jamie Lee Curtis didn’t sign back on. The results are a rather uninspired slasher flick that hits a lot of the tropes, despite the best efforts from a visual standpoint and an intriguing spin on the concept. While Halloween 4 remains a fun movie in its silliness, it’s truthfully not very good and not very memorable.

Rachel (Cornell) and her family have been fostering the now orphaned niece of Michael Myers, Jamie (Harris), after her parents die in some sort of accident. When Myers escapes in mid transport (again), he heads straight for Haddonfield to hunt down his family (again). It’s up to a scarred Dr. Loomis (Pleasance) and the local police department to put an end to Myers once and for all (again).

The problem remained though that at the end of Halloween II, Laurie shot out Myers’ eyes and Dr. Loomis blew him the fuck up. So really, it made sense that Halloween III would have to continue without him. So to bring him back, this sequel was going to have to forego logic and continuity to make it work. This sets a precedent for Halloween 4 to not give a shit about ANY continuity or ANY logic for its script because…well, he’s sort of super human now so why the hell not. He’s ‘evil on two legs’ as Dr. Loomis puts it. Why does Myers know about his niece? How does he have teleporting ability to get into locked houses, locked schools, underneath pick up trucks, and off of rooftops without so much as time or speed? It doesn’t matter. Cause he’s ‘evil on two legs,’ that’s why.


What’s even worse than the generic characters of the film, which includes dad cop, heroic babysitter girl, sleazy boyfriend, and crazy Dr. Loomis - which are ALL characters that have already been in Halloween films before – is that there is even some potential in its hodge podge script. The film starts building a fun thread about Myers’ niece Jamie and a parallel connection to her murderous uncle where she sees visions of him and his legacy haunts her current life. There is a solid spin towards the end that seals this thread in a fun and outrageous fashion. If only director Little could have pulled more of that out it would have been even better. It also helps that Little has a knack for some fun visuals. Despite some silly moments in the film, like Myers’ surprise ability at close quarters combat on the back of a moving vehicle that goes unnoticed by the people in the cab, Little uses some fun lighting and visual tricks to keep the movie fun. It’s not enough to override the terrible script or the mediocre performances, but he tries and it deserves some credit.

Halloween 4: The Return of Michael Myers has a few fun things, but it ends up succumbing to its generic characters, horrifically dumb plot holes, and over the top plot progressions. It’s not the worst slasher film in existence, not by a long shot, but it’s not a memorable one outside of its problems either. For a franchise that remains as iconic as Halloween, it’s hard to give this fourth entry more than a glace for curiosity if you’re not a die hard fan.

Written By Matt Reifschneider
Posted by DarkReif at 3:24 PM