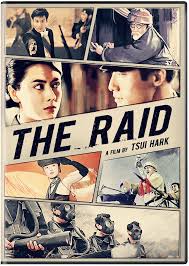 Tsui Hark’s career as a director has been a scattered one. His focus on style over substance can leave a lot of memorable moments, but when it comes to films that last the test of time…he’s not the most effective of directors. However, his latest film The Taking of Tiger Mountain was something of a throwback to the days when he had an understanding between the balance of spectacle and narrative. I bring up this film because its distributor Well Go USA is releasing one of his “classic” films from 1991 called The Raid…and the comparisons between the two films are striking. The Raid is a historically set action adventure flick with enough humor, heart, and outrageous elements to entertain most any Hong Kong cinema fan. It’s hardly a perfect film in trying to balance all of these elements, but The Raid is a strong reminder of a time when Tsui Hark could still entertain without irritating.
China was not a fun place in the 1930s, particularly when a dethroned Emperor starts partnering with the Japanese military to test a new poisonous gas. A group of revolutionaries, under the advisement of a small group of military, are trying to stop the expansion of the Japanese. They will need the help of Uncle Choy (Dead Shek), a couple of bandits, and some ambitious kids to pull of this unknown raid on the chemical plant.

Based on a famous 50’s Chinese comic book, The Raid tends to play up that kind of comic book aesthetic in the film (it’s evident by the comic book drawn transitions and panel style visuals) that really works well with the film’s oddities. While The Raid is only co-directed by Tsui Hark, the film carries his mark through and through. Ching Siu-Tung is also on board as a co-director, but he has worked with Tsui Hark on a substantial amount of films and the pairing works. Although Ching Siu-Tung’s last directorial effort was the horrendous Sorcerer and the White Snake so keep that in mind. In a way, the comic book style and over the top aspects work in his favor even if there seems to be little rhyme or reason to when they are used as transitions.

This over the top approach allows some of the tone shifts in the film to work better than they should have. The Raid has a lot of issues with how epic the film wants to be as there is too much plot and there are too many characters that the audience learns very little about as Dr. Choy and the military recruit various different people for their small rebellion. This includes two youngsters who come off as unneeded padding for comedic purposes and plot progressions than anything else. The film does craft some fun scenes to push the comedy forward in the plot as two bandits have to learn to think about more than money and a sequence of five people trying to hide in a room at various times as others appear. It doesn’t always work, for example there is a love letter scene that drags on notoriously long and has no real payoff, but the humor is surprisingly effective.

However, the true reason Hong Kong cinema fans are going to want to see The Raid is for the outrageous action. As mentioned above, the film bears a remarkable resemblance in themes of honor in a historical context as The Taking of Tiger Mountain and in the same way uses bursts of violence and over the top set pieces to establish the stakes.  Partnered with some fun performances from Dean Shek and his main cohorts, it’s outrageous in its high flying action. There are enough bullets, sword fighting, and explosions to satiate any action craving. Just in the first act alone Dr. Choy uses dynamite to blow a hole in a dam wall to knock down an enemy plane – all done in glorious miniatures cut with close up scenes of the actors. Let’s not also forget the ‘super tank’ at the end that actually ends up going vertical for a few moments. It’s that fun.

In the end, The Raid is a mixed effort as it tries to jam too much plot and too many characters into one film. It does, to its maximum benefit, remain an entertaining film with its outlandish action set pieces and mostly effective humor. It’s not a film that showcases the best of what Hong Kong action cinema had to offer in the early 90s, but it’s one that doesn’t necessarily disappoint when it comes to being a mindless adventure flick. If anything, it’s a great companion piece to The Taking of Tiger Mountain and a reminder of just how fun Tsui Hark used to be before his overreliance on CGI and spectacle to sell his movies. Hong Kong fans will definitely want to join the rebellion with The Raid though.