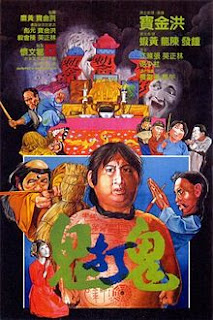 Courageous Cheung (Sammo Hung) is beginning to suspect that his wife is cheating on him. However, he’s never said no to any dare and it’s after an encounter with a ghost in a mirror that he gathers the courage to start looking into the adultery. However, Master Tam is the one that has been having an affair with Cheung’s wife and he wants Cheung out of the picture. He hires a supernatural witch doctor (Chan Lung) to make it happen with his witch craft so that it can't be traced to him. Now Cheung is going to fight off vampires and deal with other mysterious encounters like possession. He’s probably going to need some help if he is going to come out of this alive.

If there is anything one can say about early 80s Sammo Hung films it is that they are creative and impressively charming. Even though his character in this film is kind of an idiot and one that makes some horrible decisions in the film, Encounters of the Spooky Kind plays it up for some huge laughs and slathers on an incredible amount of charisma. Sammo Hung easily holds the film as the lead as usual, but he’s surrounded by some great gimmicky characters and there are some hilarious (and jaw dropping) action sequences that really build the fun. By the time he has to team up with a supernatural practitioner in the latter half of the movie to take the offensive, the audience is hook, line, and sinker in with him. Never is the film to be taken seriously and it works best in this manner with all of the gimmicks and caricatures that are supposed to be characters. This is why Encounters of the Spooky Kind works as well as it does.


My biggest hesitation about going into Encounters of the Spooky Kind was how it was going to balance the horror with the rest of the genres. Occasionally the special effects can be a deterrent to the film, but even then the film can craft something remarkably clever with how it approaches things like the ghost in the mirror sequence. Beyond its opening though, the film is never really about selling the horror of its concept. It keeps things creepy enough with some fun set designs and there is an undead "mimic joke" that gets a bit unusual, but the rest is played like one of the more fantastical kung fu flicks. The addition of two dueling supernatural warlocks adds a lot of fun to the proceedings though (and even adds some ridiculously awesome stunt work with wires to the mix) and that’s where a lot of the supernatural elements come from – not necessarily from monsters or ghosts.

Kung fu fans owe it to themselves to see just how clever Encounters of the Spooky Kind is though. The fight sequences are inspired, including one where Sammo must fight Yuen Baio in full vampire garb or a final fight sequence at the end where our hero and the villain are possessed by God like entities of specific style, and the humor is spot on. The film can drag on a bit to get itself moving and the opening horror sequence seems disconnected with the rest of the film, but it works as a massively entertaining one– even if the characters and dramatic beats are generally predictable and generic. In the end though, all one needs is a film this entertaining to suffice.