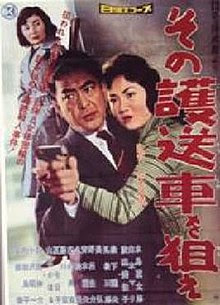 NO ‘U’ TURN:
MOVING FORWARD WITH SEIJUN SUZUKI’S TAKE AIM AT THE POLICE VAN

Seijun Suzuki is one of those directors who was able to add a lot of depth to what should have been a straight forward film. Considering his status, particularly in his early career as a gun for hire for the Nikkatsu studio, it’s in a lot of his early films that one can see his strengths as a director in more subtle ways. One of those films is the occasionally overlooked Take Aim at the Police Van. While having a release through the Criterion Collection in the US certainly makes a statement to the sly artistic merits of the film, Take Aim at the Police Van is a film that is not nearly as upfront with its style as Suzuki would be known for by the end of his innovative career. The thoughtfulness of design is there though and even as the film goes through the motions with its noir meets yakuza film tone, there’s a lot of intriguing layering that cinephiles will definitely appreciate.

One of the defining themes of the film is perhaps best represented by a moment where our hero Tamon, a prison guard on suspension bust still sleuthing to figure out why his police escort bus was attacked and two of his prisoners killed, finds a timid wannabe crook, Goro, in a small restaurant bar at the end of the first act. The two seem to have a mutual respect for the other as human beings, not as two sides of a justice system, and Goro’s bag features an unusual logo that our protagonist points out. It says “No U Turn.” It’s a moment like this that stands out in the film because it initially seems to be out of the blue. There’s a theme of sign posts that is introduced in the opening sequence and feeds into the overall artistic scheme that will be addressed here, but this moment feels different.  At first, in the manner that the film presents itself as a murder mystery story, this would seem to be an indicator for something that would come back later on the surface - which it does to a lesser extent when the bag is found after Goro is seen being seen attacked on the side of the road. However, this moment is more of an indicator for the theme of the film rather than a plot point. Take Aim at the Police Van is about how each character is consistently intent in moving forward with their lives. No ‘U’ turns, allowed. Only forward progression. Sign posts that indicate their directions included.

Naturally, as a threaded theme, this concept of moving forward is different for each of the characters. Take Aim at the Police Van is a film that’s built like a murder mystery noir film surrounding some gang activity. So the various characters, on both sides of the law and each with their own agenda within the context of the murder mystery that drives the plot, have their focus on what it means to move forward. Our hero, Tamon, has a loose motivation to find justice for the criminals he was responsible for, but for him his way to move forward can only be achieved through this discovery of why. For Yuko, the current head of the Hamajima group who earns its cash through some unsavory methods and exists as one main parallels to Tamon, her way forward is as a powerful individual and one that rightfully stands her ground against those looking to usurp her role. This intriguing thread of individuals refusing to go against their paths forward, including almost all of the secondary characters, adds a lot of depth to what should have been a standard thriller. Whether their paths intertwine or clash, the momentum of their journey forward simply creates a slightly fantastical and fate-like undercurrent that continually pushes them towards strange places and it’s fascinating to pick apart in the details.

The brisk run time of the film, as a thriller/murder mystery made on the quick by the entertainment focused Nikkatsu studio, can be a large hurdle to this approach and the emotional resonance that this film might have executed. The relationship of our bull headed hero with the various potential villains of the film, particularly the head of the Hamajima business, are all fascinating in their philosophical outlook. It partners his very positive outlook to people who many not share the same viewpoint. This is countered later by the violence he is forced to use and the cold perspective of a company that uses people as merchandise to create a great juxtaposition. Unfortunately, the time frame and its brisk pacing through the plot doesn’t allow some of the more emotionally heavy moments or interesting concepts to sit with the audience. It’s obvious that director Suzuki and the writers add a lot of depth to the proceedings, but it’s hard not to imagine the soaring film that Take Aim at the Police Van could have been with a studio that saw the artistic potential in the film instead of just as another piece of entertainment in their release slate.

Beyond the usual gangster and noir material that’s present on the surface of Take Aim at the Police Van, it’s obvious that this film works on a level beyond that. Its themes of constant movement forward, character focus, and a fate-like destiny make it so much more than what it looks like on the surface. With an eye for tension and visual charisma, Seijun Suzuki brings the most out of film and allows the audience to gloss over some of its more obvious plot conveniences or some of the performances that are not fleshed out enough. Take Aim at the Police Van is a testament to the strength of the director even when he’s working as a hired gun and cinephiles should not overlook this one for its basic foundations.

Even when it stumbles, this film continues to push forward. Taking its own themes to heart. No ‘U’ turns allowed.