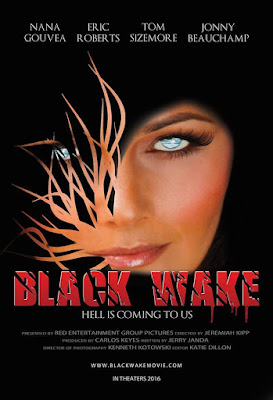 Often times, it’s the low budget films that present the biggest surprises for cinephiles willing to look beyond budgetary constraints. This is where Black Wake falls in the grander scheme of things. On the surface, the film suffers from its budgetary limits often trying to push them in ambitious ways and that creates a rift between the concept and the execution. However, if one is willing to look beyond some of the sporadic performances and spotty narrative shifts, Black Wake offers an intriguing blend of genres that lingered with me long after the credits rolled. For this story, the film attempts to blend the traditional zombie apocalypse with a science fiction/found footage approach and then enrobes the entire thing with a Lovecraftian sense of dread and otherworldliness that gives it a fun concept. The results might ultimately be mixed, but the dynamics are there and heartfelt conceptual approach carries it through many of its pitfalls.

Of course, much of where Black Wake succeeds comes in the discovery of how it blends the genres together, so I will not necessarily spend a lot of time speaking in detail about the narrative and how in unfolds. The film does, in that manner, unfold in a lot of interesting ways. It presents its audience with an initial mystery that has been assigned to a scientist, who acts as a narrator explaining a strange worldwide phenomenon killing off hundreds of people, and it unfolds as she makes various discoveries. Naturally, the faux-found footage style of a scientist talking right to its audience was initially one that seemed cheap and gimmicky, but as the film worked through its plot it only became a stronger choice. Particularly as one starts to see that she may not be of a stable mind as the events and pressure of the system begin to come down on her and that, in itself, is something which showcases that the writers and director had an idea that would blossom into something unique. Granted, this does create a lot of issues that the film must navigate around, including but not limited to how to include more characters to show the size of the situation on hand, but it generally handles it well outside of a few instances where footage becomes more cinematic and betrays the concept. Still, it creates a dynamic for the film to tell its story, build some tension, add layers, and develop atmosphere in a creatively low budget manner. As it further embraces its Lovecraftian layers though, it only gets better.

Most of the larger hurdles that Black Wake most overcome simply arise from its budgetary constraints. Special effects get an ‘A’ for effort, but don’t always work. The performances from the various actors, despite obvious cameos from larger names like Eric Roberts and Tom Sizemore, vary from intriguing and grounded to outlandishly untethered which can give the film an uneven tone. Still, there is a lot of heart that is thrown into the film from its film makers and even when the film hits a cringe-worthy moment, it’s easy to give it the benefit of the doubt for the effort and love that is obviously being fed into the final product.

For horror fans, it’s films like Black Wake that go out on a limb that inspire more than the great, well executed films that litter the mainstream. Despite its flaws, the film powers through them to deliver its story through a narrative that embraces its budgetary boundaries and genre bending fun. It’s hardly perfect and there are some perplexing moments which does include a subplot featuring two “government agents” that feels like it was building to something much bigger that the film never actually gets to, but the love, energy, and entertaining mixture it does utilize make Black Wake one of those great inspirational pieces of horror cinema that fans may enjoy for its ambitions more than its execution.