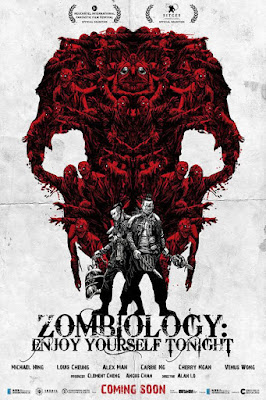 To give this review a bit of context, I certainly went into Zombiology with tempered expectations. Most of the people I had previously spoken to about the film thought the film was just rehash of other zombie movie tropes and, outside of the truly insane horror films of decades past, Hong Kong isn’t a place known for producing great horror films – even if it’s mixed with comedy. What makes Zombiology: Enjoy Yourself Tonight such a strange and somewhat refreshing experience is that it has no qualms with using its tropes in abrasive parallels with one another. This film is an energetic shotgun blast of zombie cinema. It’s scattered, perplexing, and forceful with some of its heavy-handed themes. Yet, like its subtitle weirdly promised, I thoroughly enjoyed myself while watching it. It’s definitely a film that I can see rubbing its audience the wrong way in how it approaches some of its subject matter, but for those perhaps more versed in Asian and zombie cinema it might just be one of those overlooked gems worth digging.

Perhaps what makes Zombiology feel so strange (and also making it divisive) is that it genre bends at a whim and refuses to apologize for it. There were plenty of other opinions and reviews of the film that pointed out its use of zombie film tropes, particularly from the zom-com films of the past handful of years, but to say that is all it does generally sells the film short. If anything, the intentional process that the film goes through to rapidly shift gears through various genres, comedy, horror, drama, psychological thriller, and anime (yes, the film has at couple of animated sequences – more on that in a second), is not just to rehash tropes or spatter bits of everything in the process of telling its story, but it’s meant to be representative of the personalities and eclectic nature of the young heroes that the film is following. Both of the young men, arrogant and yet unsure of their own paths, are as scattered and in contrast with their own intentions as the film is too. This would seem to be a commentary on the modern culture of Hong Kong in many ways, particularly in how it contrasts the youth of the film compared to the dedicated and remorseful way that it represents the older cast in how they treat the young protagonists with disbelief. By the end, one has to wonder if the film is more than just being seen through the eyes of its main protagonist and not being just imagined by him. Sure, Zombiology does use plenty of tropes and stylistic choices pulled from previous released films to power its plot and that can seem dreary for some horror fans, but for this reviewer it never seems to be out of laziness or to sell the film to a mass audience. Not when the film takes some of the radical twists and turns that it does to push its viewers out of their comfort zones as the film uses different tropes against the other.

Within this intentional scattering of narrative style, Zombiology partners that with a directorial style and execution that maximizes those parallels and abrasive shifts. As mentioned, it regularly will shift gears rapidly and it leaps from familial drama to buddy comedy to zombie horror to Hong Kong kung fu inspired action (complete with a homemade flying guillotine!) to anime. When the opening anime credits comes back in the third act to showcase the final battle between the heroes and the villain of the film, represented by a square shaped chicken mascot that spews out skeletal spirits and has eggs that fire off burn off the heads of people that are not being killed by zombies (!), it was obvious that director Alan Lo was going to use whatever medium necessary to make his statements. With a mascot villain, the use of animation, and the blend of humor, violence, and heart that this film utilizes, it’s hard not to make comparisons to vulgar auteur and genre maestro Takashi Miike. Thinking of how he was able to pull off the same concepts with his films, Zombiology goes for a similar approach and definitely succeeds. If there was any kind of cinema that Zombiology was trying to replicate, it’s not other zombie films as much as it is the modern career and films like Yakuza Apocalypse of Miike. With time I think the film will generally find its cult audience and people will start to see the artistic merits it’s shooting for in the way that Miike is now considered an artistic champion.

Beyond that, the execution of Zombiology is strong too. The performances, for their roller coaster leaps of emotion to follow, accomplish the task impressively and the visuals continually use the various influences with charm and effectiveness. The humor can be hit or miss, as is usual with a lot of Hong Kong films, and those who keep an open mind with the cultural slapstick humor (which is perhaps most obvious when there are real estate sellers mixed in with the zombies for one of the best running jokes that is super relevant to the climate in Hong Kong) then it won’t come off as a shock. Perhaps most impressive though is the production values of the effects. Not only is the animation surprisingly stylistic and fun, but the CGI used is not nearly as off putting as so much of Hong Kong’s CGI these days. The special effects with the zombies are fun too, although not nearly as unique as one would hope as that runs with the zombie basics.

Despite the mixed reviews I heard previously and my own hesitations for the film, Zombiology: Enjoy Yourself Tonight was a huge surprise. The best analogy that I can think of is one that I used in the introduction. The film feels a lot like a shotgun blast in its mixture of scattered intentions and powerful, loud, and punchy stylistic choices. It’s a patchwork of a lot of influences and regularly uses them to parallel and contrast the statements of its narrative, but it’s done in a manner that sparks its own comparisons to more daring moments from Takashi Miike. Even when the film is stumbling through, it’s confident, stylish, and loud with what’s on the surface. Zombiology is not going to be for everyone, but keep an open mind and go in looking to what’s being said under it all. With that, this is a film guaranteed to find its devoted – if small – cult audience. I will proudly be one of those who praises it for its tactics.