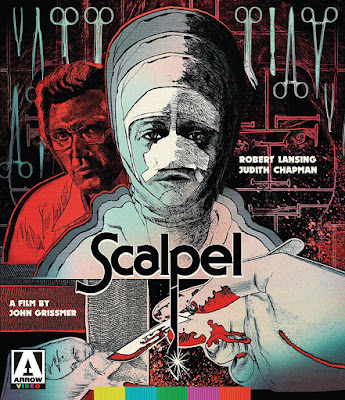 Going into the latest Blu Ray release of Scalpel, there was only one expectation that I had in mind: that it was directed by the same man, John Grissmer, that gave us the highly entertaining slasher film Blood Rage (which also received a slick Blu Ray from Arrow Video.) With a name like Scalpel and knowing his work on Blood Rage, my expectations for the film were to have a highly entertaining and tongue in cheek film. That is not at all what style is used with Scalpel. Instead, the film is a subtle, atmosphere soaked Southern Gothic film meant to be more unnerving and morally vague than anything else. Still, the film is a cult cinema find for those not familiar with it or love their 70s style atmospheric fringe horror. Not to mention, the release itself is packed with plenty of features that cinephiles will love to dissect.

The core of what Scalpel has to offer resides strictly as a 70s fringe horror film that owes quite a bit of its success to replicating the gothic tones of previous decades. Even by 1977, the idea of mistaken and/or stolen identities was an old game and Scalpel adheres to that knowledge by slathering its tale with gothic tones and developing its intimate story to maximize some of its themes and messages. It’s not necessarily an easy film to watch as its characters are all morally ambiguous and often unlikable depending on the scene they are in, but this is also one of the film’s strengths. The egos and power shifting that exists, anchored by two phenomenal performances from television icons Robert Lansing and Judith Chapman, is fascinating to watch as the film unfolds. By the time that the finale starts to ramp up, using more nightmarish elements to increase its slide from thriller territory into horror, the film has abandoned notions of right and wrong and a viewer must simply side with the lesser of the evils presented.

Perhaps the most shocking aspect of Scalpel though is that the film never really digs into the outrageousness of its own concept. It plays things close to the chest, almost with melodramatic flair, and pulls heavily toward the side of creating uneasiness with its entire plot. When you boil it all down, it’s a film about a psychotic plastic surgeon who uses his talents to forces a young unknown woman, whom he randomly finds in the street, into a conspiracy to steal the familial wealth owed to his missing daughter. Actress Judith Chapman, who handles dual roles in the film with remarkable ease, was known for her work on soap operas before and after this and the film could have easily slipped into that kind of cheesy territory. It never does. It doubles down on the intimacy of its character interactions, using the Southern charm of its setting in the second half, meticulously builds with its slow burn approach, and then just allows its audience to follow it through to the end. It has a fantastic 70s horror pace and execution and fans of the era will most certainly want to pick this one up.

As for the release itself, it should be mentioned that Arrow Video once again approach it with the gloves and admiration that films like this too often do not receive. There are the usual new interviews and other features that Arrow is known for including on their discs, but there is something fun and special included on here that is worth note. There are two different restorations of Scalpel available on the release, one that uses a more traditional color scheme and saturation and one that uses the original look of the film with a lot more green and yellow tones. Not only that, but users can switch between the two mid-film for comparison purposes. As a cinephile, it’s details like this on the release that truly indicate how far home media has truly come. Sure, sales on a whole for physical media may be on the slide, but it’s details and releases like this that make it an impressive age for the format too.

All in all, Scalpel is a massively pleasant surprise for cult cinema fans. Not only is the film an overlooked cult classic, utilizing its atmosphere, pacing, and dramatic strength to deliver a fresh feeling take on a classic concept, but the release is one that cinephiles will love to add to their collection. In the grander scheme of things, it’s easy to see Scalpel getting overlooked again this year despite this great release and my only hope is that horror fans either discover or re-discover the film and sing its cult praises. 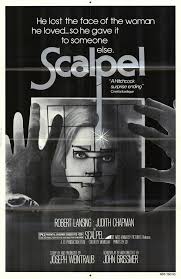