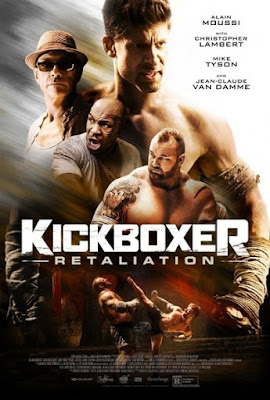 When the Kickboxer remake, titled Kickboxer: Vengeance, was getting a release in the US, it was already announced that the sequel was in production and that it would actually be part of a trilogy. These days it's hard enough to get a low budget action film funded, even with mainstream names like Jean-Claude Van Damme and Dave Bautista, let alone an entire trilogy, so there were a lot of expectations that came in tow with the first film. Of course, Vengeance was a decent little actioner with enough charm to pull off its sillier scripting, but it was hardly a film that reinvented the wheel. Fun and entertaining, but hardly more than that. It’s sequel, Kickboxer: Retaliation and the focus of this review, is an even stranger beast. While its predecessor struggled with finding the balance between being a serious film and the cheesiness of being an entertaining modern B-action flick, Retaliation has none of these issues. Instead, it embraces its outlandish concepts with an obvious tongue-in-cheek approach that works to make it far more entertaining as it abandons most of its more serious moments. This can be problematic as Retaliation attempts to craft a much larger world and story, but when you’re having this much fun with how outrageous a film is...can it really be considered all that bad?

As a sequel, Kickboxer: Retaliation hits all of the marks for what constitutes a fun new entry into this series. It’s obvious that director and co-writer Dimitri Logothetis wants to push the film further into larger territory and he’s willing to sacrifice more traditional narrative schemes to do so. This is both a blessing and a curse. On one hand, the film is relentlessly entertaining. Whether it’s the opening sequence that features our hero and his wife dressed to the nines and fighting off thugs on the top of a speeding train in the rain to the traditional underground fight sequence at the end where Alain Moussi’s Kurt Sloan must battle a steroid fueled continent of a man (played by Bjornsson of Game of Thrones fame), this film piles on the fight sequences and then surrounds them with a slew of gimmicky characters. By the end of the film, Retaliation has established an entire organization of villains - lead by a Christopher Lambert that is hamming it up to 1000% and a team of fighters around Sloan that includes a returning (and now blinded) Jean-Claude Van Damme and newcomer Mike Tyson as his two teachers. Half of the time, the film doesn’t make sense and there’s a feeling that it doesn’t even really want to. Why is there an Enter the Dragon inspired mirror room fight sequence between Moussi and two glow-in-the-dark, bikini dressed bodyguards? Because why not, that’s why.

Of course, in this entertainment first intention, Kickboxer: Retaliation does struggle to give its audience the narrative foundations to really make a film that will resonate beyond the gimmicks and the giggles. Kurt Sloan’s character is given almost no legitimate character arc, outside of finding his wife as a plot progression piece, and even the majority of the secondary characters are glossed over and given dialogue that is meant to get them to the next fight sequence or introduce another gimmick rather than develop any kind of depth to any of them. There is even a son thrown in for Jean-Claude Van Damme’s Durand that seems completely out of the blue as a solution to a plot device more than anything else.

However, with that being said, there is certainly a lot of ground work being laid for the third film. Kickboxer: Retaliation hints and establishes plot and character elements that are never resolved through the run of this film and there is a sense that the third film will be an extension of what is offered here. The opening fight sequence is hinted at to be some kind of future event that never comes to fruition and the inclusion of various secondary characters, including an ass kicking reporter and the previously mentioned son of Durand, are added but never really utilized. The biggest one for me was how they hint that Christopher Lambert’s villain is some kind of secret sword fighting badass, but that is also left to drift in the wind. Many of the issues that arise could be made better by the third film if they are explored more heavily, but for the time being they feel like unfinished tangents and do leave a little sense of disappointment by the end of the film.

Still, I’m sure the majority of the people who are seeing Kickboxer: Retaliation are not necessarily here for some kind of deep, emotional character build or even an overly coherent plot/narrative. This is the kind of film that attracts people who want to be entertained by action and wink-wink one liners. That’s what it delivers. Director and co-writer Logothetis has a strong sense of style for the film, including a fantastic “one take and no edit” action sequence of our hero kicking and punching his way through various fighters in a multi-level prison fight. There’s plenty of unique settings for him to use and he has a much stronger sense of pacing and vision for action than Stockwell had for the first film. Again, some of it is pretty silly and one has to suspend one’s sense of disbelief for some of the action to work, but it’s dynamic, cinematic, and two tons of fun.

In the end, if a film like Kickboxer: Retaliation has already peaked your interest, there is no reason to not see this film. It’s overall a stronger film than the first thanks to a director with a more defined sense of how to use action and embrace the B-action gimmicks of its script, even if the film does suffer from a weaker foundation and thinner characters. All of it is thrown out the window though if you enjoy having fun with a movie that’s made with a lot of heart and powered by a lot of energy. The action is crisp and dynamic, the characters are silly and based on gimmicks, and the the focus on building a larger world to exist in makes it gleefully outlandish.

When you have a film called Kickboxer: Retaliation, would you expect anything less?

Written By Matt Reifschneider
Posted by DarkReif at 8:42 AM