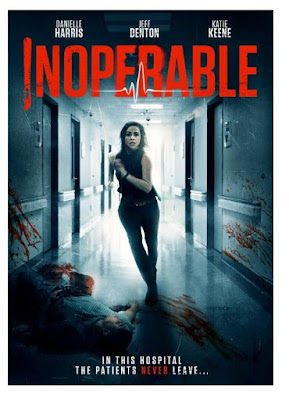 One of the more fascinating aspects of the horror genre is that, beyond any great kind of execution or originality, if a horror film has a sense of style and dedication to it than it can overcome a lot of obstacles and find its cult audience. Inoperable is an example of such. On the surface, Inoperable is another tricky psychologically powered horror film where our untrustworthy protagonist is thrown into a mysterious position and must unravel some kind of mystery to find her way out, but even with its low budget constraints and occasionally spotty execution, the film has a fun sense of style and entertaining approach that makes up for a lot of its faults. It may not be a horror film that will be a cornerstone of the 2018 slate, but it’s one that will find its cult audience in the end.

One of the more fascinating aspects of Inoperable is how the narrative is used to create the mystery. As a psychological horror film, the use of an untrustworthy protagonist is usually blended with a world that fades in and out of dream like qualities that’s distinct through their perception. Inoperable uses this style, although it is on a much lower budget. It creates a grounded realism by being set in a place that most people would recognize, in this case a hospital, and then proceeds to create that nightmarish atmosphere around it. The manner that the film flashes around in a cyclical manner as it “resets” for our lead character, gives it a maze-like quality and the smaller details that change from time to time and the use of a smaller set allow the film to embrace its dream like quality in some clever ways. The narrative itself is hardly original, but it’s a film that gets through it with some style to spare.

Granted, it helps when a film like this has a namesake like Danielle Harris to anchor the film around and Inoperable benefits greatly from her presence. Not only as a stake for selling the film to fans who know and appreciate her status as a horror icon, but also because she adds a lot to the film as the torn protagonist, lost and still determined to solve the mystery on hand. Her supporting cast, which include a few people stuck in the loop with her, are there mostly to support her character arc and don’t necessarily get a lot of material to work with or develop. There were moments where the film could have used a bit more emotional depth that could have been achieved through character development for some of the secondary characters, but for what it is it does work.

The biggest hurdle that the film has to overcome is getting all of its mysterious elements to gel together in the third act. Obviously, to dig into this in a manner to really examine why it works or doesn’t work would require a significant amount of spoilers that I simply will not ruin for people who are interested in watching Inoperable. Just know that while some of the reveals to the mystery are fun surprises, there are also elements that just don’t quite make as much sense as I was hoping they would. The finale is fun and delivers on its horror roots, building on the strange visuals, torturous sequences, and nightmarish logic, but it doesn’t explain things or hit those vague notes in quite the right manner to let the film soar.

Despite its flaws, ultimately, I had a lot of fun with Inoperable. The film has a fun sense of style, it uses its low budget to add to its nightmarish feel, and Danielle Harris remains one of the underused horror favorites and handles her own in the film. Inoperable is not going to perhaps blow away horror fans, but it’s a serviceable psychological horror thriller sold on its style and energy.