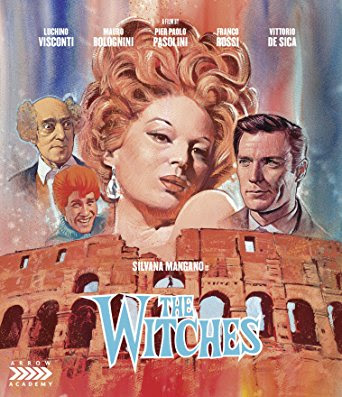 Outside of being an anthology centered around witches, I tried to go into The Witches as blind as possible. The Arrow Academy label is known for finding some truly under the radar cinema classics for release and their recent slate had been ambitious and robust. With that in mind, there are certainly expectations that go with a release like this one. The Witches presents an intriguing film watch. As an anthology film, it’s often muddled and perplexing with a massive array of styles and approaches to the five stories that it covers. Yet, it’s perhaps one of the more fascinating slices of Italian cultural life from the late 60s that I’ve seen represented on celluloid. It’s a film so inherently rooted in its time period that it’s hard to necessarily pull it out for its commentaries and themes beyond that, but it’s one that within its context is still a fascinating concept – even if the execution is not nearly as dynamic as it might have been. For cinephiles, The Witches is one of those unique films to add to one’s collection if the time period interests them, but it’s not a film that the more casual film fan will necessarily buy into. It’s a curiosity piece more than anything.

With an expectation that The Witches was going to be a diverse anthology surrounding witches, it’s surprising that not a single segment is actually about witches in the traditional sense. The opening titles, a fun 60s style animation that occasionally leans into a combination of Bewitched and Terry Gilliam, uses a traditional witch concept with a broom-riding, pointy hat wearing image, but that’s the last time you will ever see a traditional witch in this film. Instead, there is a unique interpretation of what “witch” means in a ‘modern’ (read: 60s Italian gender progression ideologies) manner. As much as I was looking for diversity in the segments, this is far more diverse than expected and the manner that the film approaches the concept is culturally fascinating. Having the surprisingly talented Silvana Mangano in the main female role of each story is also a fun tidbit that feels much more layered and thoughtful than expected and showcases some impressive range from her – as a glamorous actress, scorned housewife, or comedic focus of two bumbling slap stick characters. In this regard, The Witches is definitely a more intriguing film as it plays against the usual expectations.

The Witches certainly has its unique slice of 60s Italian commentary and a fun variety of stories that go with it, but ultimately, it’s so patchy in its execution that it never fully soars like it might have. With any anthology, the quality of each segment does vary, but here it varies to some staggering degrees. After opening up on the best portion of the film, which uses a famous actress as this parallel for the vicious social forces placed on women and uses strange tension and a strong lead performance to power out its message, The Witches is a roller coaster. The middle stories all range in style, but outside of the slapstick segment that carries on far too long and lacks a lot of the charm needed to carry, most of them feel a tad underdeveloped. In particular, a story about a father looking to take vengeance on the man that impregnated his daughter is just awkwardly dark and violent – also meant to be satire – and it just doesn’t feel like it spends enough time developing anything for that emotional stake to be set. Of course, the film ends on its second-best segment, featuring a young Clint Eastwood as an out-of-touch husband to the emotional needs of his wife, and its fantastical and surrealistic leap frogging approach works very well to its message. Still, even with the opening and closing portions, The Witches struggles to find a cohesive feel and succumbs to the three lackluster and weighted segments that comprise the middle portion of the film.

All in all, cinephiles that love Italian cinema or have a taste for a bit of the more obscure and intriguing films of the era will find plenty to love about it. It has some great commentary from the time period, it features a diverse series of performances from Mangano and the first and last segments really do embrace the concept in some fantastic ways. It’s too bad that the style inherently dates the film and the quality of the segments is so inconsistent. It’s a film that’s perfect for the Arrow Academy label and their goals. Fans will certainly want to dig into this release with its new 2K restoration and some of its special features (it also features a new commentary by Tim Lucas which automatically gives most cinephiles a reason to purchase on its own) so if a film like The Witches intrigues you, pull the trigger and pick it up even if the film itself is a mixed venture. 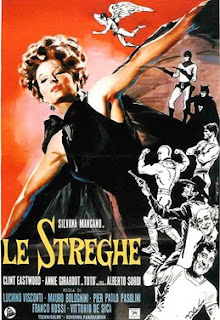 Written By Matt Reifschneider
Posted by DarkReif at 12:05 PM