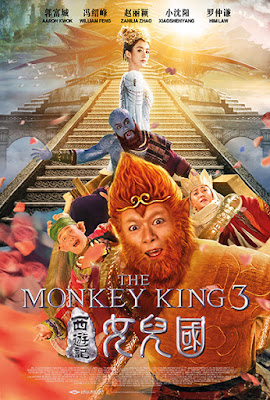 For starters, it’s really hard to get excited for another Monkey King/Journey to the West film. The various films and franchises that have had bigger than life budgets and huge names attached to them to come out of China recently is starting to wear thin. Granted, the quality of the films are not necessarily waning, thanks to the clever reinterpretation of the character with Wu Kong or the continued fun that is brought to the table with Stephen Chow’s interpretation, but the saturation of the market doesn’t necessarily spell great things. Still, these films do some serious box office cash in the Chinese film market. With the upcoming Chinese New Year, that only means we are getting at least one more and it happens to be the third film is the box office busting Monkey King franchise. For a bit of context, this series has left me with a lot of mixed emotions. The first film was a CGI train wreck that had no idea how to properly use the talents in it, but the second film took a very different tone and went much darker and used a borderline horror approach to take a few steps in the right direction. One could only hope that The Monkey King 3 would continue that uphill sprint and improve on the material that came before it.

Did The Monkey King 3 accomplish this? Well, that’s a tricky question to answer.

Namely, it’s a hard question to answer because this film, like its predecessor, once again changes the entire tone of the film. In a way, it’s kind of brilliant because each film embraces a different kind of emotion. The first film aimed for pure wonder and whimsy while the second film aimed for a fear wrapped cautionary tale (not unlike a Grimm style tale at times), but this third one aims for a distinct romantic and ‘star crossed lovers’ approach. Granted, the film certainly has its action elements, but it really does intensely focus on developing the emotional state of our hero Monk and his fated crossing with the Queen of Womanland - yeah, yeah, that’s the name of the place they end up - and it’s actually pretty interesting. It takes the franchise in a new direction and that’s commendable.

This allows The Monkey King 3 to go to some unique places that the last couple have not as it develops its messages and intriguing commentary. Considering China’s own distinct history with women and gender, the film has to dance around some of its own moments that may or may not sit well with some of its viewers. In particular, there is a pregnancy scene that certainly hits some very interesting tone and messages that, depending on your own cultural background, can be interpreted in a variety of ways. Still, the film attempts to pull some obvious notes from the success of Wonder Woman in its development of Womanland (seriously, I hope that is just poor translations for the subtitles) and in a way it’s attempts at being progressive with exploring gender and feminist concepts within the traditional realms of a Journey to the West story are somewhat respectable. It may not always be successful, at least to the degree that it might have, but there seems to be an effort. For a family friendly fantasy franchise, it’s a path that was unexpected.

With the romantic outlook of the tone and focus on the Monk/Queen relationship and its complexities, The Monkey King 3 also takes an intriguing step away from using Wu Kong as the main crux for the film. Considering he’s the titular character, it’s a massive and chancy approach. Fortunately, Aaron Kwok once again adds a lot of humor with his physical approach to the character and he remains one of the brighter elements of the film. He gets to strut his stuff with some great visual gags and the film utilizes him well for some of the larger action set pieces. The action itself takes a large step back to make room for the romantic plot and tone and there are really only three sequences of fantasy action to be had in the film. It’s on the finale that goes full franchise CGI outrageousness too which lends to the more intimate tone the film is focused on.

Execution wise, The Monkey King 3 is still a mixed effort. The CGI can change drastically from crisp and fun with those family friendly cartoonish elements, to perplexingly under rendered. The performances are fun, but the script continually underplays some of the secondary characters and never gives them much of an arc even within the major arcs for the leads. Also, the humor is either brilliantly executed slapstick or bafflingly childish. However, it’s not necessarily better or worse than the previous film in its mixture and remains entertaining nonetheless with its approach, enough so that I’m sure it will continue the box office dominance of this franchise.

Going back to the opening question on whether or not The Monkey King 3 was able to continue the upward success of the franchise, the answer is both yes and no. Inherently, the balance of entertainment to quality is stronger with the film focusing down on the Monk and the trials he goes through in his journey where the concept of romance and love layers into some interesting groundwork. On the other hand, the film is still too mixed in its execution to be truly as insightful and impressive to win over a lot of more critical individuals. Like its two predecessors, The Monkey King 3 is a mixed bag, but it is fun, bright, entertaining, and its unique tone differentiates it from the rest of the franchise. For that, it does come highly recommended for fans of the Journey to the West tale.

Written By Matt Reifschneider
Posted by DarkReif at 10:35 PM