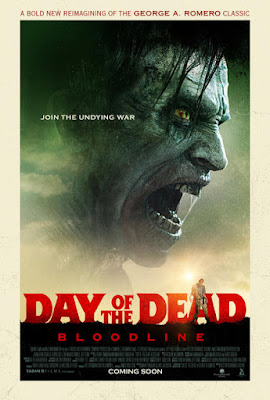 Another day, another remake of a classic and beloved horror film. Yes, despite the title having a colon and a pointless subtitle, Day of the Dead: Bloodline is not a sequel but a second remake attempt of George A. Romero’s flawed masterpiece. Second remake you ask? Perhaps everyone has put it out of their mind, but the horrid first remake attempt was released in 2008, sans a colon and subtitle. Being a fan of the original, I felt personally assaulted by the 2008 remake and was not keen on revisiting another attempt to cash in on past glories. However, when Lionsgate unleashed the trailer, I became more interested as, like trailers are supposed to do, it made the film look at least decent. Also, what grabbed me is that this version also attempted to follow the basic plot of the original film (military and scientists in a bunker) unlike the 2008 remake which basically takes the Day of the Dead title and makes an unrelated zombie film. However, like I should have expected, my hopes are dashed as even though it follows the plot of the original better, it somehow eclipses even the abyss of disappointment left by the 2008 version.

Unlike the Romero original, which begins years after a zombie apocalypse, we are catapulted into the beginnings of the outbreak in order to give our characters some “back story”. Then flash forward 5 years to scientists and military personnel in a bunker (but not underground) trying to figure out a cure for the zombie virus until a pervy zombie from our main character’s (a medical student that somehow becomes a CDC virus genius) past makes his presence known and throws a kink into the system.

What absolutely kills this film is the cardboard characters and flat acting. The 2008 remake had bad acting but at least everyone involved were professionals. Here they are all C level actors, dug up from The Asylum backlot. Everyone is hired for their looks and build, as opposed to realism and actual acting talent. I didn’t even buy the knockoff Rhodes asshole character. The only person that puts in any effort is Johnathon Schaech as our new Bub, err… I mean Max (renamed for some damn reason). He played the pervy slasher in the Prom Night remake so he has the knack of playing pevs in shithole remakes in general.

Other downfalls include the camera work as our director (a nobody who has no right to direct any version connected to a master like George A. Romero) obviously went to the shaky mc-shake-shake school of Paul Greengrass as we get plenty of nauseating camera-work during our action sequences. The look of the film is also bland, with an aesthetic similar to a SyFy original TV movie. All of this leads up to lame, play-it-safe conclusion. Much like the Dawn of the Dead remake, the zombies are also super powerful, running full on and having bites that produce blood splatters comparable to a Cronenberg Scanner. Fans proudly displaying signs with “No Running Zombies” will find much more to bitch about here.

The 2008 remake was bad enough, but it could at least be somewhat enjoyed on some lower levels for laughs. This new version doesn’t even have any unintentional laugh factor to increase the enjoyment. The minimal CGI and practical effects were nice, but I was led astray with the whole bunker setting… thinking this would be an apology for the first remake and rectifying it by staying more true to the original version. Far be it from me to actually be served up a completely bland, forgettable and downright insult that was actually worse. Fuck this film and fuck the people who made it. Say what you will about the Dawn of the Dead remake, but even with lackluster characters and the whole running zombie aspect aside, at least it was an entertaining soda pop zombie flick. It was quick and tasty but lacking nutritional value. It makes me wish writer James Gunn and director Zack Snyder would have been able to make a Day of the Dead follow-up with some entertainment value. As is we are now left with two dire Day of the Dead remakes. I now conclude with a short utterance by the one, the original, the only captain Rhodes: 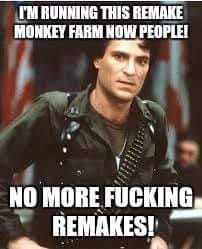