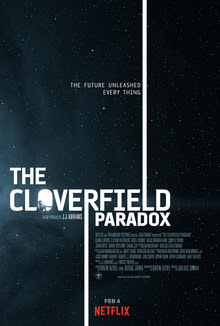 One of the aspects of film consumption that has changed drastically in the last handful of years is the distribution of information. With the use of the internet, studios have been required to drastically change how they handle the release of information for films - either keeping it a heavily guarded secret or completely blitzing all channels to maximize social consciousness. This is what makes the Cloverfield films so fascinating. The first film used its mystery as a wonderful marketing campaign which lead to it being a huge box office success. The second film, 10 Cloverfield Lane, used mystery and a short marketing window to surprise audiences who had no idea a loosely threaded sequel was even being made. The third film, The Cloverfield Paradox and the focus of this review, went to a strange extreme. It used its own rumored existence to sucker punch fans by having its trailer premiere during the Superbowl before being released immediately to the masses on Netflix after the game. It was a brilliant marketing scheme that immediately drew attention from fans and curious cinephiles in droves to the streaming giant to find out just what the next Cloverfield film had in store for them.


The Cloverfield Paradox certainly had plenty of surprises. For fans and newbies alike. The biggest one being now the film is a massive misfire and a narrative mess. Seriously. It’s perplexing at the mess that greeted fans after the relative heights reached in quality by the previous two entries.


Now, it’s not like The Cloverfield Paradox is a truly and offensively terrible film. It has its redeeming qualities. The production value is crisp, featuring some fantastic designs at its core and some strong visual flair from director Onah. The performances are also impressive as the film utilizes its robust cast, featuring a full range of character actors who are desperately acting their way through the dialogue and problematic narrative. In particular, Mbatha-Raw handles her own in the lead role as Hamilton and creates some emotionally punchy scenes as she is thrown through a roller coaster of emotions. Even beyond some of the execution, there are intriguing concepts at play in the film that work for me. It plays out almost like an Outer Limits meets Event Horizon meets Cloverfield meets Leviathan. As a fan of all of those, this is certainly an ambitious and fascinating approach while the first act builds a slick science fiction narrative that perks the interest.

As much as I love the idea for the genre blending and stylistic kaleidoscope that The Cloverfield Paradox is gunning for, the narrative and tones of the films are a complete train wreck. Most of the issues that arise in the film do stem back to being spoilers for the plot, characters, and narrative used in the film and so I won’t delve too much into the details of those, but know that the film misuses so much of its potential. Entire secondary plots, particularly one concerning the lead character’s husband on Earth, feel disconnected and shoehorned into the film, the use of horror elements make no sense as it attempts to use its “paradox” plot slant as a crutch to trick get its audience into not asking ‘why’ to anything, and the manner that the film de-evolves into rehashing formulaic beats from other superior science fiction and horror films in the second half is soul crushing. Considering how interesting the first act is, introducing its audience to its huge potential and some intriguing concepts, the film only deteriorates from there until its final moments which invoke one of the largest eye rolls to be had this year in cinema.

For some fans who go in with the right expectations, there might be some fun to be found in The Cloverfield Paradox. It has a slick production, the casting is superb as they all do their best with the undercooked and confused script that they have, and the first act builds some great style and concepts for massive potential. Yet, the film completely dissolves under obvious reshoots, poorly executed narrative flow, and tones that are sporadic at best. It’s a patchwork quilt of ideas and moments from better science fiction films. Really, the film is hardly awful, thanks to its redeemable qualities, but compared to the previous two entries in the franchise it suffers from the greatest sin of all: sheer disappointment.