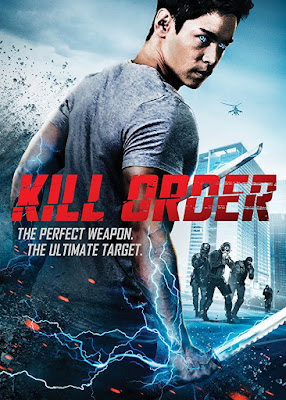 For years, Blood Brothers has been standing behind the champions of direct-to-home video film making and, in particular, those who are making an artform out of the action films that are overlooked for theatrical releases and end up lost in the shuffle of the numerous films released each Tuesday. Directors like Isaac Florentine, Roel Reine, and James Nunn are all making waves in the genre as true vulgar auteurs. Now, you can add James Mark to that growing list.

James Mark’s debut film, Kill Order, is a modern low budget action classic. In its simplicity, the film shows its true colors and they brilliant and bold as a throwback action film brimming with martial arts and broad stroke gimmicks. It uses the tropes of the genre, spins them with a slightly science fiction spin, and then just delivers the thrills and spills that one wants from an action film without the spectacle of budget that too often gets in the way of core foundational strengths. It’s not a perfect film, but the better aspects of it are so strong and charming that they easily overcome the places where it stutters. Enough so that action fans are going to find one of the true gems of the genre this year.

As mentioned, the simplicity of Kill Order is perhaps its greatest strength. For a film that uses a science fiction basis to power its narrative, where a young man is experimented on to give him abilities to “pull energy” from around him to make him faster and more powerful must outrun the entity that created him, the film does not necessarily try to go in that direction. There are elements of a larger universe, the stark contrast of the clean-cut agency that creates these powerful fights, the different fighting styles of each of the assassins, and the manner that the film ends on something of a cliffhanger predicting a much more robust and expansive battle ahead, but the narrative is simple. This is a chase film, linking together a series of intimate fight sequences, and crafted around the emotional journey of one character. It’s narrative is brisk, the characters and simple and feature some strong surprises within the plot structure to give obstacles to our main hero. Occasionally it does feel a bit too thin, particularly with an intriguing romantic subplot that does not feel quite as impactful as it might have to create some dynamics with the main character, but the manner that it moves through the motions is inspired and highly entertaining to see with the obvious budget restraints being shoved to the side as a way to be creative.

Of course, this stripped-down focus also allows Kill Order to showcase its talents: in the ever-loving awesome fuckin’ action. Director James Mark cut his teeth as a stunt man and stunt coordinator on plenty of big action films prior to this and it’s most obvious in how he presents the action in this film. It’s crisp, dynamic, complex, and impressively well shot. Action fans will promptly love what Kill Order has to offer.  Chris Mark, who plays the torn young man in the lead, showcases some impressive talent as a stuntman and actor here, using the brisk narrative to his advantage and allowing the combat sequences to let him shine. Seriously, the fight work here is stunning and for a low budget debut, director James Mark never shies from embracing its highlights. For the most part, the action includes plenty of martial arts work so this will mostly appeal to those who love great fight sequences, but all action fans should take note of the talent on display here.

When one looks at the continued strength of the artists that are coming out of the direct to home video market, it’s strange to wonder why more respect isn’t given their way. Director James Mark and star Chris Mark sure as hell deserve some credit for Kill Order. It’s dynamic in its strengths, piling on fantastic fight sequences and using its brisk pace to overcome its budgetary constraints. It’s a film that’s charming, entertaining, and ultimately (and massively) a pleasant surprise. If you love action, you can only do yourself a favor and see Kill Order as soon as you can.

Here’s to hoping this gets franchised. The more, the better.