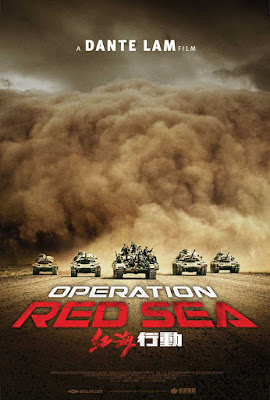 Dante Lam has risen to be one of the most recognizable forces in Chinese cinema. What makes this so impressive is that he has done it by making strong films in a variety of different genres. Cheesy Michael Bay influenced action, dramatic focused sports films, or the classic Hong Kong action thrillers. You name it. For his latest, Lam continues on where he left off with his worldwide hit, Operation Mekong, and fully embraces the moment to produce a full on military action thriller. Operation Red Sea, based on a true event, is a chaotic and action-packed ride into the events surrounding a vicious mission for a small team of Chinese Navy operatives as they try to evacuate some Chinese civilians out of an erupting war zone. The film is a unique blend of the Hollywood style military action drama with hints of Dante Lam’s own love of the Hong Kong style that is almost problematically focused on its plot and narrative sprint. Still, Lam delivers on his promises with action, tension, and a remarkably diverse set of sequences that will have action fans happy with the results.

Operation Red Sea is viciously action packed to every edge and corner with high octane bullet riddled battle sequences and white-knuckle tension. Dante Lam has always had an eye for action and its utilized for the majority of the run time in his latest. In all seriousness, even after the initial action sequence, showcasing our heroes as they siege a ship that’s hijacked by pirates, the film rarely takes a breath that isn’t solely dedicated to setting up the plot and threads to get the film to the next action sequence. This leaves Operation Red Sea feeling like an almost viciously intense experience, throwing its audience into a chaotic blender where the bullets move fast, but the narrative moves faster. The intent of the film seems to be to recreate that sense of chaos in war and it throw its audience into it. Outside of a few news clips indicating the situation that leads our military team into the desert, the audience is saddled with them as they leap into their new mission. We know as little or as much as most of the team and Dante Lam does not hesitate to show the brutality, chaos, and violence of the conflict around them. In this regard, Operation Red Sea is impressively effective at creating the sometimes overwhelming sense of confusion, fear, and tension that the characters are feeling and for that, the film gets a huge recommendation.

The problem that arises from this approach is that the intensity of its pacing and almost non-stop approach to action doesn’t give the film a lot of time to settle the audience in with the characters. There are moments where the characters are given some time to connect with one another, through smaller scenes like teasing one of the soldiers for his candy or the fun banter between the new sniper and his spotter, but it’s all fairly surface level. Granted, the performances from the cast are impressive - particularly one scene in the end of the second act from Jiang Luxia as she desperately tries to save one of her fellow soldiers, but the film desperately needed some more time in the first act establishing their humanity for the emotional payoff to be as resonating as it could have for its audience.

For those perhaps worried that Operation Red Sea might end up being a bit ‘too Hollywood,’ have no fear because Dante Lam certainly injects his own style and a bit of that HK fun into the mix. There are plenty of dynamic sequences on hand here, including the use of a “no cut” slow motion sequence in the opening ship raid that establishes the style of the film nicely, but Lam does not shy away from embracing the outrageous too. As mentioned, there are plenty of gun battles and raids to embrace the war zone feel, but it even goes a bit further than that. There’s a couple of bomb disposal sequences, a parachuting arrival for the team, and - perhaps my favorite action scene in the film - a tank chase that ends in a standoff in a sand storm. It’s a slick and glossy flick, but one that soars with style.

While Operation Red Sea remains a mixed bag overall, suffering mostly for its lacking development for its core characters, the results are still spectacularly entertaining. It’s the break neck pacing, powered with relentlessly vicious action, and style seeping out of every crack that makes this a film a must-see for action fans. It doesn’t quite have the resonance that some of Dante Lam’s other material does, but for what it is it’s quite successful.