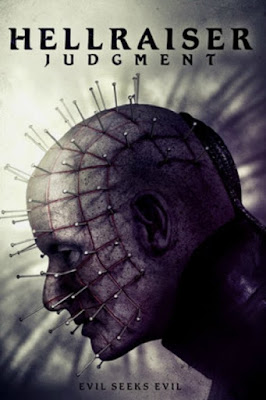 The Hellraiser franchise has seen its ups and downs and, depending to who you talk to, has been on a downward spiral for decades. Personally, the franchise has always held a special spot for me as a genre fan, but even then, it’s easy to see its faults and some of them are unforgivable. When the franchise hit a new low with the last entry, Hellraiser: Revelations, which existed solely for the purpose of rights renewal for Dimension Films, it seemed as though the Hellraiser franchise’s days were numbered. When Hellraiser: Judgment was announced, the sour taste of Revelations remained, and then when the film met substantial delays - to the point where it seemed questionable that the film would ever get a release - it didn’t help out matters or initial opinions for fans. However, here we are in 2018 and Hellraiser: Judgment finally gets a release and, comparatively speaking to the last handful of entries, it’s not too bad. The film uses the Hellraiser formula, but gives it a slightly more updated tone and it tries to maximize its lower budget to give fans what they want to varying degrees of success. Judgment is not one of the best of the franchise, but it’s hardly one of the worst either.

Right away, it’s obvious that Hellraiser: Judgment is going to attempt to blend old school with a bit of modern tonality. Fortunately, it’s not the obvious attempts at utilizing popular trends like Revelations did with its found footage elements, but it’s something that some fans will enjoy and others will find irritating. For Judgment, the tone of the film shoots for the grimy and gritty look of early Saw films, but with the darker noir tones that worked so well in Hellraiser: Inferno. For this reviewer, it works. It gives the Cenobites an even more grotesque and modern nightmarish quality that director Tunnicliffe embraces fully in some of the early unnerving sequences where the audience is introduced to some new mythology that digs into a court like procedure where the Cenobites judge pending victims. On its own, these sequences work with the tone and give the film a kind of hellish point that the main narrative, as a detective and his team try to hunt down a serial killer, to parallel. This is a film where its main protagonist, a seasoned, jaded, and burned detective, is spiraling down a rabbit hole of hell in more ways than one. It makes for some intriguing commentary about the traumas of living in a world where death is so common and digging into the potential mental echoes of believing one has a purpose to judge their fellow man, no matter what side of the law they are on.

There are a few things that are a bit harder to overlook for the more critical fans out there. Hellraiser: Judgment is still pretty low budget and the constraints of that can be felt in some of the scope that it shaved for the sake of a smoother narrative. Instead of giving the film the kind of dark operatic tone that some of the previous entries handle so well, the film attempts to go big in some areas (even going so far as to try and build a concept that Pinhead, who once again acts more as a guide and final judge of torment than a slasher killer, is only half of an equation that is balanced out by something angelic), but it can’t embrace those with the budget it has. The low budget and straight to home video tone also comes into play as the film tends to forego many of the secondary plots, particularly with the main protagonist’s partners and their own character arcs, for the sake of streamlining the entire experience. There’s a lot of interesting depth that is hinted at in its script, but the writing, execution, and budgetary limits don’t allow the film to truly explore those like it might have.

For a film that could have - and for all intents and purposes, should have - been terrible, Hellraiser: Judgment remains a pleasant surprise. Director Tunnicliffe uses his time as a special effects guy on the series to really sell the hellish horror elements with a more modern tone while he adds in enough new mythology and parallels between the main narrative, the characters, and their own collapse into hell with decent effective. Of course, the film is hardly perfect still and succumbs to some of its own ambitions (and weirdly limits the use of the actual Lament Configuration which seems counter intuitive to the entire franchise) while being occasionally too predictable. In the end, Hellraiser: Judgment is flawed, but most definitely a step in the right direction.

Written By Matt Reifschneider
Posted by DarkReif at 6:54 AM