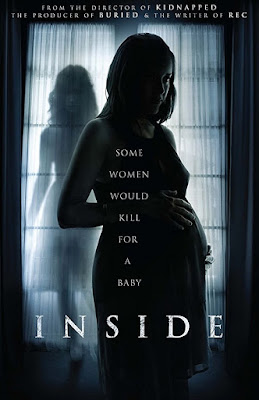 The original 2007 French horror film À l'intérieur, released in the US as Inside, is one of the greatest horror films of the last decade. I’ll say as straight forward as possible in that manner. It’s a cornerstone of the brief and impactful extreme French horror movement of the time period and it’s one that will definitely carry on as a memorable and vicious example of just what that movement gave the genre. When it was originally announced that Inside would be getting a westernized remake, it wasn’t shocking but it also didn’t inspire a lot of faith. One thing about the original is that it’s very much rooted in a European style of horror and that may not be a style that can be replicated to appeal to western audiences. Still, hope was there when it was announced that it would also be a Spanish co-production and that one of the writers and directors of the original REC would be handling the writing and that the director of the intense, toe-curling experience known as Kidnapped would be helming it.

However, the mixture of styles between the Americanized concept and the Spanish use of atmosphere don’t always find the right balance. On one hand, Inside is a much stronger film than expected thanks to the direction and performances, but on the other hand it’s still too close to the original to not be constantly compared to it. When it’s a film as iconic and impressive as À l'intérieur, that’s a problem.

For those perhaps not familiar with the original, Inside may still strike some strong emotional moments for them. After a slightly unsettling opening (not a good way considering the over the top and unintentionally hilarious car wreck,) the film finds its groove courtesy of the performances and director Miguel Angel Vivas. The atmosphere is thick, attempting to replicate the natural lighting of the original that gave it such a minimalist tone, and the sound design adds to it. Rachel Nichols does an admirable job in the lead, anchoring the film and showcasing that she deserves some credit as a modern staple of genre film making. The supporting cast add to it, particularly Laura Harring who appeals with her fearful screen presence more than anything. The film also has a strong look to it, production wise, and Vivas knows how to use a setting to help him out in crafting the suffocating atmosphere of the concept. It is a bit strange that Christmas in Chicago is not blistering cold and snowy as hell (adding that would have definitely set he film aside from the original in its look), but that is more of a nit pick than anything else. The film establishes its narrative nicely, raises the stakes for its protagonist, and delivers some decent thrills and intense moments of terror.

The problem then remains that throughout the entire film I could not shake the fact that it was too similar to the original and not nearly as effective. The thrills and kills come off as a tad predictable and the film doesn’t commit to the nihilistic and brutal intensity of the French extremist movement in a way that I would want. At its best, Inside serves as an intense thriller with strong execution, but at its worst the film feels like it cannot stake its own ground and is just replicating motions. When the film really does start to go on its own path in the third act, it’s a bit too late to set itself aside as something truly effective and simply echoes on the same ideas without the necessary courage to take it to the levels that it wants to take its audience. It has all of the right components, including some great production design, atmosphere, and moments of intense style (the final sequence is a bit heavy handed on its symbolic imagery), but the narrative and predictable nature getting there is not nearly as layered and intense as one would expect from a remake of À l'intérieur.

To iterate my stance, Inside may very well be a strong and serviceable horror film for those who have not seen the original. It has a great sense of atmosphere and tension, the performances are solid, and Vivas brings his European style to the Americanized script. Unfortunately, the film tends to go through the motions a bit too closely, unwilling to go the extremes of the original and yet unwilling to forge its own unique spin on the material. For those who have seen its predecessor, Inside is a film that just cannot live up to its heights. Like so many other films, it’s solid on its own, but ultimately unnecessary.